Lohengrin wins the Chess Game but not the War

Wagner’s Lohengrin, in Oliver Py’s co-production for Theatre Royal La Monnaie and Opera Australia, is suitably arresting in its visualisation and sonic splendour.  Yet, given the scale and heft of Wagner’s music and ambition, it also comes across as a deeply Italianate work – full of bel canto like melodies, arresting ensembles, duets, and arias.  Its London premiere (1875) was given in Italian. It is a splendid antidote to the music drama narrative elongations that inhabit the world of his Ring Cycle.  The four hours plus of this performance did not drag.

And what a pleasure to see such a large stage inhabited with such monumental scenery - always with the intent of heightening the drama.  It often allowed the large chorus to be on stage without cluttering or stasis – as both observers and commentators.

Set in some post war zone – Berlin 1945 – the set (Pierre Andre Weitz) employed a huge multi-level revolve that hulked its way into different configurations, potentially suggesting a bomb imploded building, maybe a theatre, held together by shattered windows. Nothing less than a stark and ravaged world – intimating the aftereffects of that tribal echo: war as a mode of governance.  Wagner’s German volk are always at war, real or imagined, the scent of blood intrusive in daily life – always sustaining a deep rage against the “auslander”.  The stark graffiti in black on one of the set’s high walls – told us that some survivors of this regime believed death was the true master of Deutschland.

This was a post-modern and eclectic take on the dream-like myth that Wagner imagined.  It generally worked – allowing for the drama to unfold both down and upstage.
It did not test our credulity by presenting a skiff drawn by a white swan – but instead employed down feathers as a representation of the departing swan who bought forth the knight, of the holy grail, Lohengrin.  This symbolism was returned to at the end of the opera when the director gives the audience a starker ending than the one that Wagner wrote.  There is no return of the boy prince, Gottfried, changed into that swan by the sorceress Ortrud. Just a lifeless body – the spell of resurrection broken – only the downy feather of the departing soul remains.  There is no redemption in this interpretation.  Elsa remains broken by the loss of her brother and her lover.  Traditionalists might moan, but this seemed to suit the tenor of our times, and the timeframe of the production:  senseless war and destruction.  Whereby, truthfulness engenders a deep and bitter loss of innocence.

The sonic splendour of the music was heightened by the brass ensemble that was placed in the auditorium in the upper circle - summoning attendance and commenting on the proceedings.  The various marches that Wagner employs were thus given a semblance of surround sound – and refracted across the auditorium.  The ecstatic rejoicing of the Act 1 Finale – when strangeness and happiness have been unleashed - was awesome, all performers contributing to its wild hubris.

Jonas Kaufmann - in his first fully staged opera in Australia – looked suitably dashing, with his curly salt and pepper hair.  Vocally, he began rather shakily – very husky – and strained for some of the higher notes, but he did create a believable knight of the holy grail.  He sang with great conviction in his big Act 3 aria – “Im Fernem Land”.  His rapt incantation of his spiritual homeland – Montsalvat – was a stellar achievement.  He is still incredibly handsome (though he has developed a little tenor’s tummy).  He took many risks, attempting some high falsetto singing and softly inflected accents.  As the Guardian’s Martin Kettle wrote of him a decade ago: “totally involved and giving a masterclass of daringly varied, sometimes mannered, vocal technique”. Overall, it was a responsive Lohengrin.

His care and concern for Elsa was touchingly portrayed. The love duet in Act 3 – “Das susse Lied verhallt” - was carefully gradated in its responsiveness to the deep-seated bliss both lovers carry in their hearts, as well as the emerging thrust and parry over the knight’s name and antecedents. This complex and evolving duet was spun with true skill by soprano and tenor.  The sadness Kaufmann was able to convey when his new wife was unable to keep her word about asking him these profound questions was deeply telling.

The French-Russian mezzo, Elena Gabouri, almost stole the show as the evil Ortrud, her enormous dark voice articulating the forceful attractions of power and revenge.  She explored the intense phycological pressure, logic, and sexual persuasion that Wagner’s inspiration draws upon.  Her singing and acting uncovered a deep malevolence that haunted beyond the curtain calls.

The Australian singers were splendid as well, particularly the baritone.  Simon Meadows made a very handsome Telramund.  The Act 2 Scene 1 confrontation between him and Ortrud - when he is exiled and dejected, she still planning her triumph - was a master class in how two singers can mine the deep psychology that Wagner embeds in individual scenes.  Each stage of the duet was clearly articulated.  She plays Lady Macbeth to his Macbeth – but in this telling she survives him – implacable to the end, having consumed him on “the sweet delights of revenge”. The intense mood the singers created in this scene, and the power of their mutual sexual attraction did not, however, need the overlong display of excessive physical fumbling at its conclusion.

Emily Magee has a large and clear voice.  As Elsa, she was adept at registering a sense of profound exhilaration when she encountered her dream lover:  the knight who defends her honour against the charge of murder.  Her two big arias were given with poise – though not necessarily with the intense innigkeit that they require. Still, her Act 2 aria, “Euch Luften die mein Klagen”, was sweetly modulated and floated clearly on the night-time air.  Her developing doubts about the true nature of her hero were nicely essayed.  She and Gabouri worked well together to highlight how the poison of doubt can seep into the most blissful happiness.

To hear a large Wagnerian orchestra in the deep pit of the State Theatre – and see the scale of scenic invention on that enormous stage – was indeed a thrill.  The brass players rang out with cutting splendour.  The strings shimmered in the opening prelude but lacked that ultimate sense of awe that some conductors can bring to this music. This performance did not quite capture Wagner’s ethereal, romantic demands: “it pours out exquisite odours, like streams of gold, ravishing the sense of the beholder”. The coordination across these large forces was sharply managed by the conductor, Tahu Matheson.  The choir and orchestra (Concertmaster: Sulki Yu) were given rapturous applause by the audience.

Daniel Sumegi as Heinrich, the King was an impressive presence – though his dark bass seems to have a metallic edge, with sharp vibrations, that places a querulous auditory gauze around the vocal pleasures of his arresting assumptions.

Warwick Fyfe was an irritable, laconic, devilish Herald – using his vibrant voice to progress the action and set the scene.  He knows how to dominate a scene.

Riley Crouch-Phan was agile and responsive, as the mute, disembodied Gottfried.  His interactions with the young dancer (James Baron), who cavorted with him in a differential space (al a the imagined Monsalvat), were particularly effective.

The costuming (Pierre Andre Weitz) was suitably restrained, but with flashes of colour and extravagance to denote rank.  Shane Placentino and Kate Gaul were the team that revived this production, originally staged in Belgium. This staging (lighting Bertrand Killy) highlighted both the monumental and intimate and managed to make the mythical almost believable.  The chess game between Lohengrin and Telramund, as they battle for the life and death of Elsa, was a nice touch: both playful and heroic.  As were the iconic sculptures – remembrance of 19th century Germanic intellectual achievements - housed like large-scale curios, dusty, and neglected neath the rubble of war. 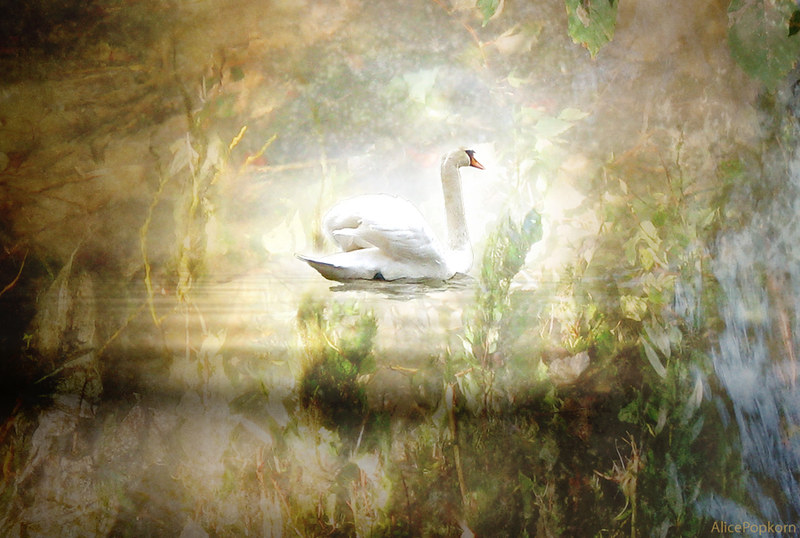