Words flow on towards an infinite reality

The Belvoir’s 2020 adaptation of Virginia Woolf's A Room of One’s Own (1929) – linked essays regarding fiction and women (the fiction of women, women in fiction) - is realised in a sparse production with one actor (Anita Hegh) and one mime (Ella Prince). The rich arguments of the original prose require an actor/reciter of extraordinary stamina and character.  It is some measure of the success of this production, particularly through Hegh’s performance, that the piquant rhetoric and cumulate passion of the original text often catches fire across this tightly edited 75 minute peroration (adaptation by Carissa Licciardello & Tom Wright).

The wit, anger and clear sighted arguments around the constraints of writing are fashioned into a series of dense monologues that are leavened by the appearance of various back stage tableau.  These are instantiated by a young women - encased in a perspex cube [back, stage right] - who seems to reflect some mimed response to the shards of patriarchy that Woolf uncovers.  Although this scenic counterpoint provides some arresting and piquant images, it does not consistently add to the layers of rhetoric and intellectual grunt that Woolf’s words so artfully articulate.  Neither artificial enough nor frisson inducing to theatricalise what is unmistakably a series of lectures delivered to women undergraduates in 1928.  Sometimes, one wanted to hear the voice of the young women answering back to the past – and its gender struggles – with the sharpness of a different kind of inequality.  Given Woolf’s view that Aphra Behn was the first female writer to have “freedom of the mind” some robust Behn like theatrics might have been worth risking.

What Woolf’s voluminous words do do is release our minds into a flow of consciousness that delivers its own sensual power and pleasure, particularly how the sharp fragments of reality are built by the perceptive watcher of life into a heightened sketchiness.  Paragraph by paragraph, this is startlingly layered. Her words inflame the imagination.  Reality is indeed “something very erratic, very undependable—now to be found in a dusty road, now in a scrap of newspaper in the street, now a daffodil in the sun.”

The trajectory and razor sharp playfulness  of Woolf’s arguments still dazzle.  Her analysis of the 19th century novel - via Austen and the Bronte’s - is full of lived knowledge and wit.

Some of the set speeches are indeed darkly engaging.  Woolf carefully dissects the obsession of male writers with the eternally imagined women – Goethe’s Ewige Weibliche. This objectification, valorisation, vilification is deftly contrasted with their insignificance across millennia in the exercise of societal power - economic, social, cultural – particularly within the desires of creativity.  Woolf explores the dark secret that seems to lurk at the heart of this obsession: the fear, anger and threat that such insignificance might pose to the fragile ego of male power.

Hegh delivers such insights with chiselled intonation, that if it sometimes lacks sonic power still delivers the  coloratura of these speech patterns with conviction - especially the rising cadences and the pausing humour.  The invocation of the final stretch of the work heroically summons the power of women’s creativity in a way that still challenges and heartens.  If much of the staging suggest the expansive monologue, there are many stretches where the operatic force and oratory of Woolf’s words take flight. Her protean thoughts linger in the air.

The only props for Woolf are a chair, a small notebook and a handkerchief – which activate a loop of pauses and catching at a thought before the next rush of words.  The costuming reflects shades of comfort, freedom and elegance (charcoal and grey) – which somehow seems to nicely reflect the upper middle class sensibilities of the Bloomsbury women (set and costume designed by David Fleischer).
​
The theatrical dimensions of the production by Carissa Licciardello are low key – modest even - but the radiance of the words (thousands of them) as delivered by Hegh are stored in the mind.  This feels like immersion in the flowing rivers of consciousness that Woolf so startlingly developed in her famous novels.

In 2020, a century of patriarchy’s grip may have been loosened somewhat, but it still holds on tight in company boardrooms, in the legal hierarchy, in engineering firms and the bourse – across the levers of power – while the violence of domesticity continues to gender its murderous rage: “locked up, beaten and flung about the room”.

Woolf dissects this power and subverts its course onto a imagined world where Coleridge’s androgyny of the mind seems to compound an alchemy of ecstatic creativity.  As Louis Kronenberger wrote in his 1929 review, here was “the distillation of the crystalline mind, so gaily and freshly and yet forcefully written”. 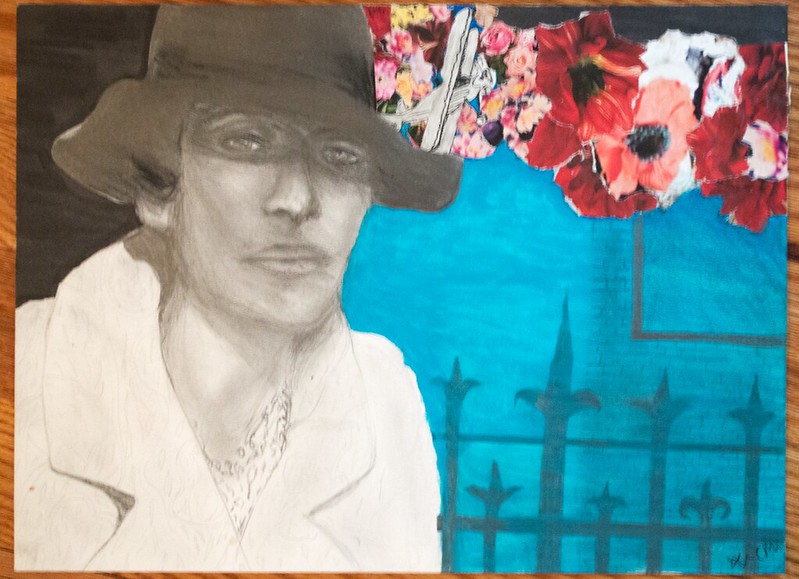