Metamorphosis has been a long time coming

Brian Howards’ Metamorphosis (1983) is being seen in Sydney after a gap of more than 30 years.  This chamber opera, based on Steven Berkoff’s adaptation of the Kafka’s novella, still packs a punch.

Opera Australia has developed a memorable performance space in their Surry Hills operational headquarters – near their scenery workshop.  This involves raked seating with very firm seats and a wide and high stage area with a small pit for chambers forces. This provides an inviting addition to Sydney performance options.

This production made great use of this space, particularly its height, with scaffolding that creates the pivotal bedroom on high and box rooms even higher – while below creating the family house interconnected by various steps – with much metal grill work that allowed us to see into Gregor's bedroom, even when the windows were metaphysically closed.

Simon Lobelson, as Gregor, was a revelation.  He became an insect. His clambouring up the walls, crawling over the stacked chairs and ceiling, his hanging upside down and swinging and singing, were marvellous physical incarnations of his changed body: one evening a harassed travelling salesman, next morning an insect, unable to rise from his bed.  His vibrant baritone handled the scores’ Sprechstimme and syllabic articulation with sureness, communicating the bewilderment of the man/insect and the little heartbreak that gnaws away at the physical and emotional connections with his family.

The vocal writing is demanding and occasionally one yearns for a few more moments of stillness and deep reflection on his plight.  What it is good at is mapping the various stages of repulsion that his family now feel towards their vanished breadwinner.

Taryn Feibig as Mother gave a finely observed portrayal of a German lower caste hausfrau, conventional, weak, easily influenced. Her soprano voice carried the text with clarity and nuance.  Her yearning for and care of her lost son was lovingly unfolded in Scene iii, when she forces herself to go to his bedroom and remove some of the now useless furniture that clutters his room.  Her motives are truly mixed, but the depth of her conflicted feelings towards Gregor are tenderly essayed in the music.

Tabatha McFadyen (a very late replacement for the scheduled soprano) gave a finely gradated understanding of the sister, Greta, particularly her mixture of fear, loathing and love for her insect-brother.  Her emergent spunk was in direct contrast to her mother.  Unfortunately her voice did not always project the text with utmost clarity.

Christopher Hiller as Father was sturdy and pompous.  His solid baritone projected his lyrics with shaded feeling.  His return to work as the major-domo, extravagantly garbed, was a nice comic interlude.

Adrian Tamburini as the Chief Clerk was an imposing presence, and  bought forth some dappled Weimar angst, with his dark voice riffing on disbelief and his jackboot walk implying totalitarian restraint.   The mixture of threat and comedy was nicely managed.

Benjamin Rasheed as the Lodger was very amusing – desiccated in his fastidiousness. His voice projected strongly across the performance space. His accent flecked the vocals with sharp meaning.

The chamber orchestra produced some fascinating sounds, reminding us of the fecundity that Britten found in such reduced resources.  The lyrical riffs of the electric guitar – al a Greenwood  - were tantalising, while the obsessive percussion (stage right) made significant commentary on the drama.  The string techniques the composer employed – scraping and juddering across the clefs - were startling. The score also has its occasional lyrical outbursts in the vein of Alban Berg.  The music is aggressive and complex.   Its disparate tonal plates intersect and grind into heightened meaning the disoriented  states of the various characters. Much of the melodic interest was in the chamber orchestra.  Paul Fitzsimon kept the score tight and fearsome.

Tama Matheson’s direction was effective and confronting, as the logic of the now insect man’s behaviour was pursued to the point of Gregor eating from a toilet bowel.  Some of its touches were distancing and subtle: off stage, so to speak, the Chief Clerk and the Lodger seemed to be reading overgrown versions of the Kafka novel.

Mark Thompson’s set was complex and knotty, while the lighting by John Rayment added its own glare and gothic touches to embellish the Grand Guignol aspects of this Weimar morality tale:   the projected spiders subtly invoked arachnophobia  The costume for Gregor’s metamorphosis was minimal – unfurled book pages implying a laminated plated back - but it was Lobelson's  physical interventions that instantiated the sense and sensibility of an insect-being trapped in disbelief and revulsion.

The downbeat ending was a little unsatisfactory.  The music seems unable to find its appropriate resolution to mirror the text’s view that Greta was now ripening into her own metamorphosis: a young women ready to replicate the life of her mother, as her parents now smugly look forward to the pursuit of a husband for her.

This is a challenging work that effectively explores the contour of the Kafka’s nightmarish world.  It could do with some tightening and telescoping of the drama whereby music alone invokes and instantiates the power of the emotional experience, overturning the work’s somewhat obsessive wordiness.  At times, Metamorphosis is too much the sung play. 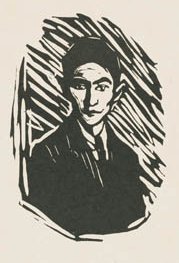