It is many years since Britten’s The Rape of Lucretia (1946) has been seen in Sydney.  This production by Sydney Chamber Opera and Victoria Opera is directed by Kip Williams and designed by Elizabeth Gadsby.  The ritualised aspects of its invention – Christian chorus instantiating and commenting on the slow-motion reporting of sexual violence – are given full reign, while the direction plays with the work’s potential for a kind of postmodern ambiguity, drawing starkly on its mixed morality about suffering and redemption.  This production also ensured the work’s strong connection with the latter Church Parables, particularly Curlew River (1964).

This version plays frequently with gender.  On a vivid white set the singers sing their own roles and mime the actions of their gendered counterpart roles.  Thus, the contralto sings Lucretia but her role is acted by the bass who sings her husband Collatinus, and vice versa.  At times a sense of Japanese stylisation arises through these layers of characterisation, whereby costume visualises character, singer activates character and actor channels both voice and costume. At its best, this simple device allowed the character to drawn on additional complexity (it’s already there in the music) subverting the traditional orthodoxy of male supremacy in both Roman and Christian terms.  Whether is sometimes lessened our attention on the sole character that Britten had imagined/created was a muted outcome.  It also hinted at some level of human puppetry as one character was moved around the stage by both male and female forces.

Physically, this allowed for some striking choreographed action where the singing voice became a physical representation of the struggle within a character.  Most notably in the scene where Tarquinius stalks the darkened household in search of the sleeping Lucretia, panther like, aquiline lust stalking his limbs.  Jessica O’Donohue’s acting as Tarquinius was riveting, adding a real fission to the issue of sexual desire, stealthily navigated across genders.  Likewise, her singing of Bianca was beautifully modulated, with excellent diction and fine feeling, particularly in Act 11 when she comprehends, with veiled metaphor, the fact that her mistress has been raped by the Prince of Rome: ‘My child you have made a wreath”.

The singing across this cast of mainly young singers was excellent with natural yet pointed delivery of the highly poetic text, written by Ronald Duncan after the French play by Obey (1931).

The Male and Female Chorus, those disturbing yet distilling bookends to this ancient tragedy, were given significant focus through excellent singing, diction and acting.

The Male Chorus was originally written for the high tenor of Peter Pears.  Andrew Goodwin’s assumption was delivered with a baritonal tenor that ensured we experienced the role’s richness, power and beauty. His execution of Tarquinius' Ride to Rome was a tour de force of singing and acting, making us realise how virile and disturbing this music is – we certainly heard how “the hoofs punish the earth!”, how “muscles strain, tendons taut…Nothing’s slack”.  This was opera as an uplifting and frightening experience, as it takes us on a journey that builds on the intoxication of lust and presents its imagery and action in thrilling musical terms.

Celeste Lazarenka as the Female Chorus has less dramatic music but does carry the crux of the intellectual dilemma that the drama unfolds, particularly in the scene after Lucretia’s suicide.  Here, her voice was arresting as it gnawed at the existential threat that lurks in violence.  She picks up the refrain of Bianca and Lucia - “so brief is beauty.  Why was it begun?”.   Her deepening response starkly questions whether violence and death is the sum of human existence.  “Is all this suffering pain, is this in vain” was sung with deep beauty.

In a world racked by war, disease, inequity and suffering, the doubts of the Female Chorus were a lesson in how to articulate finely gradated pain.

In this production, the response to this existentialist conclusion comes from the now ecclesiastically garbed Male Chorus – all Church of England hierarchy – with the serene tolling of a benediction that promises the resurrection to come. But the voice of the Female Chorus lingers above his voice.  The doubts are planted.   In the end, the dead Lucretia and the deeply disturbed Female Chorus look out across the stage to each other, trying to comprehend the tragedy that they have foretold and enacted.

Jane Sheldon as Lucia sang with pristine beauty, her white, bright voice carrying across the high space of the Carriageworks space.   The scenes of domestic activity inspired Britten to write some of his most beautiful music, crystalline, yet weaving the three female voices with Straussian skill and pleasure – no doubt building on the lessons he had learned in Peter Grimes (1945).

Anna Dowsley (Lucretia) has a rich dark voice that suggests youth and beauty – her resistance to the violence of Tarquinius was sung with passion, her voice rising with ease into profound anger and pain.

Her farewell duet with Collatinus (both now un/dis/gendered), with its deep breathed Purcellian ground and piercing oboe solo, captured the essence of their misunderstanding, as their love founders on forgiveness and the unforgiveable, as the two dark voices vocally enclose then side step each other into lamentation.  As Collatinus, Jeremy Kleeman displayed a warm rich bass voice and much tenderness.

The shock of Lucretia’s suicide was simply and effectively managed in this production as she plunged her hands and bridal gown into blood.  It seemed to give meaning to her vocal line: “See how my wanton blood/washes away my shame”.

As Tarquinius, Nathan Lay’s burnished singing was full of animal instinct.  He seemed drenched in power, his vocal line imbued with a force that must be satiated.  But Britten also gives him some tenderness and free will, as he deflects his lust - “to wake Lucretia with a kiss/Would put Tarquinius asleep awhile”.  He even posits some reasoning – “can you deny your blood’s dumb pleading?”, but assumes his masculine right by sword point: “poised like a dart… then falls to his lonely hell”.  This performance unearthed some of the scaffolding around masculine violence.

Simon Lobelson as Junius was full of gruff masculinity (less poisonous than Tarquinius) and also buxom gentleness as the fair Lucia.  The flower duet of Bianca and Lucia was beautifully unfolded by singers and players – as a prelude to deeper tragedy - preceded by the orchestral white light the score unfolds as a perfect summers day.  The orchestra in this work is a marvel of invention.  Its slimline strength (13 players) can be shattering or sweetly blissful.  It speaks to the embedded poetry of the libretto and underlines its key words and phrases with particular clarity.

Jack Symonds directs the chamber forces.  He also plays piano, deftly drawing out its hints of recitative and continuo.  The harp writing in this work is glorious to behold and hear (Rowan Phemister in glittering form).  The staging with its white circular terraces was arresting and allowed the eight singers a wide expanse to stalk and control our attention.

The ethereal beauty of this score rests nears its febrile violence.  Its simple story telling unfolds like a parable, but its meaning is not simple. The confounding Christianity that weaves its ways throughout the work is both startling and reassuring -  in its careful understanding that negation and disbelief may be too difficult for human beings to hold onto forever without either a steely super human intelligence or belief in a better meaning/world.

The work lingers on doubt, like those last notes of the small orchestra, step by step questioning what we have witnessed:  Ritualised suffering, gendered violence, or human tragedy? As the Male and female chorus intone: “Now with worn words and these brief notes we try/ to harness song to human tragedy.”  Like much of Britten, the music and words reverberated long after the lights have dimmed. 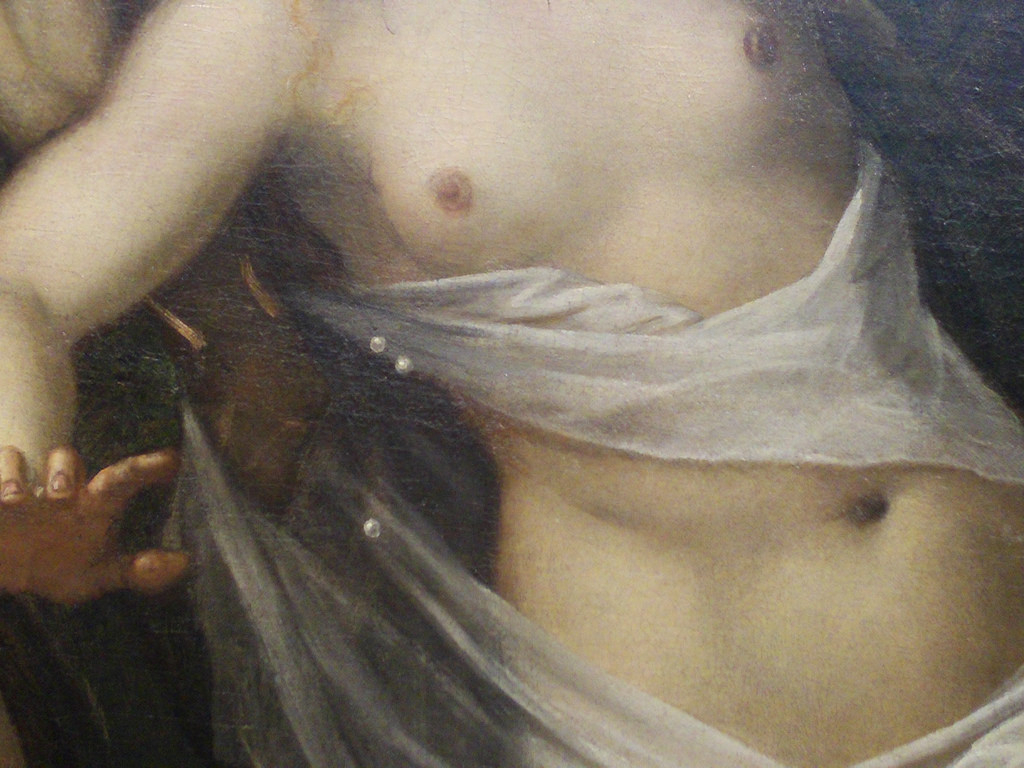