​Verdi’s Luisa Miller (1849) is a relative stranger to Australian opera audiences.  On its own terms, it is a vivid, semaphored response to the tumble of ideas that Schiller amplified in his five-act play – Kabale und Liebe (Intrigue and Love) - produced in 1784.

Verdi always responds to big ideas by flecking their meaning with his own rich understanding of human beings.  At the heart of this opera are deep-seated loves.  Miller for his daughter Luisa; Luisa for her lover, Rodolfo; Federica for her childhood sweetheart, Rodolfo; Rodolfo, in some ways, for his father, Walter.  The intrigue settles on inheritance, marriage and property, political influence and past fratricide.  Like the play, it unfolds its symmetry with stark contrasts between the aristocracy and the people.

It is an opera that looks forward to La Traviata (1853) and Don Carlos (1866).  The composer flexes his muscles and experiments with both structure and orchestrations. In Luisa he creates a passionate heroine transfixed and cruelly shattered by love and political intrigue.

Verdi rises to every situation with powerful and demanding vocal writing, while the last act is bathed in tenderness and understanding similar to that of La Traviata.

Nicole Car, as Luisa, shines with a big vibrant voice and a finely observed understanding of love and despair.  She is a country girl but no milksop.  The deft determination of her aria, Tu puniscimi, o Signore, when she has to betray her lover to save her father from the gallows, was dramatically apt and vocally pure.  She is a star in the making, as her Tatyana in Eugene Onegin showed last year

Diego Torre as her aristocratic lover, Rodolfo, was all Latin passion with his big voice suitably burnished.  His aria of despair and recollection, Quando le sere al placido, was well modulated across its wide range of moods.  Now wonder Arrigo Boito described how this divine cantilena was at the heart of Italian sensibility, with its echoes of past ecstasy.

This opera supports several key roles, notably Miller himself who was lustrously sung by Dalibor Jens; almost too handsome, he managed to convince us he was the heroic old solider.  His love for his daughter was touchingly essayed, particularly when he persuaded her not to commit suicide. His Act 1 aria about freedom of choice in marriage was bold and rich in execution.

The two basses, Count Walter (Raymond Aceto) and Wurm (Daniel Sumegi), remind us that the great duet between King Phillip and the Grant Inquisitor in Don Carlos did not spring from barren soil.  In Act 2, the dark droll recollection of the murder they conspired at, in order to inherit real estate and titles, was arresting, with chilling touches of dark humour and fear.  Schiller and Verdi knew how to explore the role of state sanctioned murder.

The American Aceto was a revelation.  He displayed a rich even bass and a droll stage presence that seemed to invite loathing and reflected the inherent complexity of his character.  At curtain call, his persona was suitably booed.

In the small but characterful role of Federica, Sian Pendry gave a nuanced reading of a woman yearning for love, but ever ready for vengeance if it doesn’t materialise.  In her duet with Rodolfo she suavely dipped low into her contralto notes and shone now and then in her upper reaches.

The chorus were exemplary in their various manifestations.  Andrea Licata conducted the opera with drive and discipline.  The orchestra responded with sharply urgent playing particularly in the overture. The series of musical recollections (leitmotifs) that Verdi employs in Act 3 were nicely judged by the conductor to deliver maximum poignancy.

This production (Giancarolo del Monaco) treats the story as one long funeral rite for Luisa, telling us the story that leads to her death with suitable solemnity and reflection.  The staging was arresting, awash in black, white and silver, though some of its hydraulics created notes that weren’t in the score.

This was a night of excellent theatre, from the bucolic sprung rhythms of Act 1- reminding us where the Ballo in Maschera (1859) Scene I finale arises from – to the tender poison duet as the lovers, Romeo and Juliet like, expire in each other arms.  To paraphrase what Britten once famously said, if you can’t enjoy Verdi in the theatre then something is wrong with you!

This is a new production from the old world (Switzerland) and does the opera proud.
​ 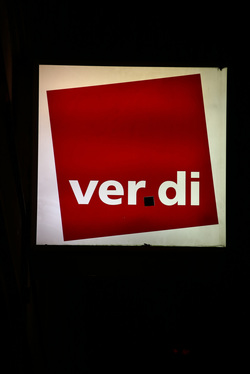