Ermonela Jaho has had a triumphant debut season with the Australian Opera in Verdi’s La Traviata.  Her Violetta has received standing ovations.

Her voice is a thrilling instrument.  Her mouth opens wide, almost as wide as Jessye Norman. The first hint of sound registers as dark and diaphanous – but it soon ranges across a wide palate of integrated sounds, coloratura included.  The gleaming top is sure and cuts through like a diamond – supported by the most exquisite pianissimo which she used to great effect in this performance.

She is a powerful actor. Her Act 3 seemed to be channelling the prima donna’s of old.  She reminded us a little of Amalita Galli-Curci in her haggard look and vocal gleam – deranged black locks flowing down her stricken gypsy face.   Her vocal acting, following Alfredo’s return, summoned forth reserves of power and the chilling realisation that nothing could save her from death.

Her Act 1 finale, Sempre Libera, was intoxicating in the sheer power of her voice and the complexity of thoughts it instantiated. She made expressive and differentiated use of the repeated summoning of Gioir, gioir! that Verdi gifts his singer – as though her sheer will was summoning forth the power of absolute freedom to resist the strange longing that the young Alfredo has awakened in her.  Jaho paced this scene to perfection.

The long Act 2 was delivered with style and passion.  Verdi packs so much into this act – revealing the youthful love that Alfredo Germont holds for his beloved Violetta and his impetuous anger as he his bought face to face with the reality of how his idyllic lifestyle is being funded – through the sale of her property.  Ho-Yoon Chung presented a very young man – open, impressionable – with the grit of anger and determination creating a believable boy on the cusp of manhood.   Structurally, Verdi gives his tenor a beautifully contrasting aria and cabaletta that deepens his identity and our enrichment.

Then comes the extraordinary scene between Violetta and the elder Germont.   Her encounter with her lover’s father is one of the great duets in all opera.  Across 20 minutes, it charts the encounter of two different people who begin to realise in their different ways what the power of deep love might involve.  The purity of Violetta’s response in ‘Ah! dite alla giovine’ again bought reminders of Galli-Curci. As Germont the elder, Jose Carbo was a realistically young father, not so implacable, but knowing of the world’s jaundiced way towards independent women and heartfelt in his response to the challenges that Violetta poses with her grand outpouring of love towards his son.

In mirror fashion, Verdi ends this arc of interactions – Act 2, Scene 1, with an aria and cabaletta for the elder Germont.  This encompasses the foursquare and beautiful ‘Di Provenza il mar’ with its handsome top notes lovingly delivered by Carbo as well as its dogged but dramatically effective cabaletta which Alfredo cuts through with cries of believable anguish.

Act 2, Scene 2 ratchets up the tension and sends us back into the public domain as Violetta, her old protector, her acquaintances, Alfredo and ultimately his father end up at another party with the dark tensions rippling beneath the surface of the gay music.  The grand finale, whereby Alfredo dashes his card winnings in the face of Violetta and then regrets it immediately, followed by the haunting sounds of Violetta forgiving him,  underpinned by the imprecations and horror of the crowded room, magnifies time within the framework of powerfully sprung emotions and music.  The tempo is carefully throbbing, but through increased dynamics and slowly grinding propulsion, we are carried on a wave of rising emotion – each participant contributing their own slash of colour to this powerful canvas of a very public humiliation. Everyone was on song in this scene, making us marvel again at how Verdi creates ensembles of extraordinary power and insight. The tendrils of this work reach out decades to a similar scene in Otello, when Desdemona is thrust down onto the earth by her enraged husband.

The orchestra were sharply responsive to their conductor – Renato Palumbo – who bought out some beautiful inner voices in the lower strings, particularly in Act 1, and supported and encouraged his singers to reach for the passion and ardour embedded in this work.  The preludes were a little on the slow side but beauty and tension were maintained.

Domenica Matthews (Flora), Samuel Dundas (D’Obigny) and Adrian Tamburini (Douphol) rounded out the comprimario roles with distinction.  All responded as vital singing actors within the developing drama – creating vignettes of reality across the fulsomely populated stage.

The OA chorus acted well and sang with thrilling power – the crispness of articulation in the Act 3 offstage carnivale was evidence of great attention to detail that delivered handsomely in both terms of musical pleasure and dramatic intensity.

This was a revival, realised by Hugh Halliday, of the well-upholstered Elijah Moshinsky production (1994) that has served Opera Australia well.  Its evocation 1870s Paris, with its rich spring brocades in Act 1, beautifully cool and autumnal light in the garden scene of Act 2 and sharply cold and haunting in Act 3 mirrors the trajectory of the drama (set design by Michael Yeargan).    The costuming by Peter J Hall is lavish while the lighting effects (Nigel Levings) in Act 2 were particularly beautiful.

While developing her craft, Jaho has experienced instances of prejudice against her Albanian heritage – experiencing one suspect that dark shadow of anti-Romany that seems to always be incubating in Europe.  Australia might have it own dark feelings with regards race and ethnicity, but on this night, multicultural Sydney embraced her whole-heartedly.  Brava and please return. 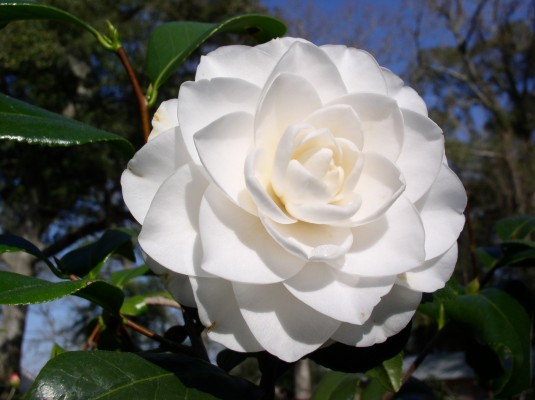