The cut glass language and propertied class distinctions of Wildean comedy are difficult to bring off.  The cast of the new production at the Genesian Sydney, Sydney do well with his surface sheen and farcical situations to create an enjoyable evening in the theatre.

This production goes at a romp – its pace is always sharp – but accents and gesture wander all over the place.  The final line – delivered without any sense of impact and cadence (it rounds out the meaning of the title) – was emblematic of its prioritising of youth and action over verbal elegance and wit.

It was as though the director (Trudy Ritchie) had decided that this late 19th century play needed to be restored with the current of broad farce racing through and away with its language.  There were stretches of verbal dexterity but not enough to ensure that the play’s fulsome witticisms, epigrams and paradoxes, would startle and sparkle with that dexterous lilt – so Irish – that Wilde spins forth like a tricky web.  As Auden put it – here is ''perhaps the only pure verbal opera in English … a verbal universe in which the characters are determined by the kinds of things they say, and the plot is nothing but a succession of opportunities to say them.''   In this production, the overwhelming focus on action had somehow tempered the potency of the  language, with not enough actors interested in its music.

The opening of the play took some time to establish its playful dilemma, of masculine subterfuge employed to avoid the burden of societal expectations. It was flecked with some irritating stage business and lack of attention to costume and gesture.  The young male leads were not always effective in establishing the drollness of their verbal sparring. Cameron Hutt as Algernon opted for a languorous approach – but the inelegant, oversize dressing gown and the telegraphed camp gestures, including the flicking of his not so long hair behind his ear, was no substitute for strong diction and crispy dandyism.  This camp required more coiled energy.  What he did establish with his swishing was his outrageous playfulness, which belongs within the Wildean canon. If only the sting in the tail of the language could have been delivered with more indelible tone.  His comic instinct was not so sure – while his charm was somewhat fitful.  His latter acts were equally hybrid – when the impact of his genuine interest in Cecily should spark a different level of foppish attention.

Ted Crosby as Jack began a little wanly – more like a badly dressed marionette than self-possessed landowner and serious chum– and maybe a little too bewildered by the devilishness of Algernon.  He seemed ill at ease in his clothes.  His cuff and collars and manners lacked some of the elegant starchiness of his class. At present he is not quite sure what to do with his hands.  But his performance did grow across the evening – with his youthful spunk emerging in later acts and his ability to engage in some effective double takes -  though he almost botched the last line of the play.

Emma Wright as Gwendolen was rather bizarrely dressed in Act 1 – like a Neapolitan ice cream cake – and towered above the rest of the cast.  Her voice is somewhat mannered – languorous, a little throaty and unvarying. At times she seemed to be channelling the voice of Joan Greenwood – English film star and Gwendolen in the 1952 film – but could not capture the cut class English voice that this role cries out for .  Her comic exchange with Cecily was successful,  nicely tempered, but her range is not large and she was unable to summon greater levels of inflection and anger.  But the ‘my Ernest/your Ernest’ exchange is impossible to defeat.

Rosanna Hurley’s Cecily was delicious – whipped cream and raspberry tart – full of charm and wit and she handled the extravagant language with true skill.  Her every word was audible – and her pertness and will were nicely charmed into believable action. She was indeed a catch – though her now earnest Algernon seemed so much less so as the evening wore on.

Melanie Robinson’s Lady Bracknell was fun - knowingly nodding to her audience, like some regal battleship for she was voluminously camouflaged in portentous shades. It was surprising that she spent most of the evening standing – particularly in Act 1 - given her status and decorum.  Some of her formidable pronouncements were well done, but there were a  few verbal mishaps – the cost sometimes of the pace.  Her bewilderment at the comic contour of Gladstone bags and Brighton line trains was sometimes fitfully etched – we laughed but felt no weight in the words that can oh so effectively combine disbelief, shock and irritation.   She was more formidable in Act 1 than in the last act – where in costuming terms she had to compete with a Miss Prism (Lois Marsh) who was both simpering in manner and wildly decorated with a dress that seemed to betoken the bosomy pinafore regalia of an English flower show.  This was a soft voiced Miss Prism – and some of her startling comic edicts were washed away in an undifferentiated tonal flow.  This verbal opera requires a gradated sound and impeccable timing al a Rondo Capriccioso, not placid projections.

John Grinston as Dr Chasuble was pitch perfect in presenting this character’s dilapidated thinking – creaking precept - and bouncy Church of England loopy benevolence.  He was diversionary, like a buzzing bee.  His hat almost swallowed him – which may have been a nice comic touch - through his pinz-nes glasses seemed to have a life of their own.  It was unfortunate that he had been directed to use his arms in a rather disturbing manner that seemed to indicate a later generation of hardy men who help landed aeroplanes with their warring arms.

Chris Dunwell as Lane if not quite the sharp and waspish Jeeves was drolly in agreement with his young master about the verities of stylish living, while Rod Stewart was a doddering Merriman, cartoonish, but worth a laugh.

The set design by Owen Gimblett was a treat,  nicely capturing an almost Edwardian never-never land, in both town and country. The tiny stage seemed aglow with colour. Lighting design by Michael Schell supported this visual splendour.   His musical soundscape was also dashing and witty.  The costuming - Peter Henson - was at times bizarre, but generally effective.

This was an enjoyable evening in the theatre. 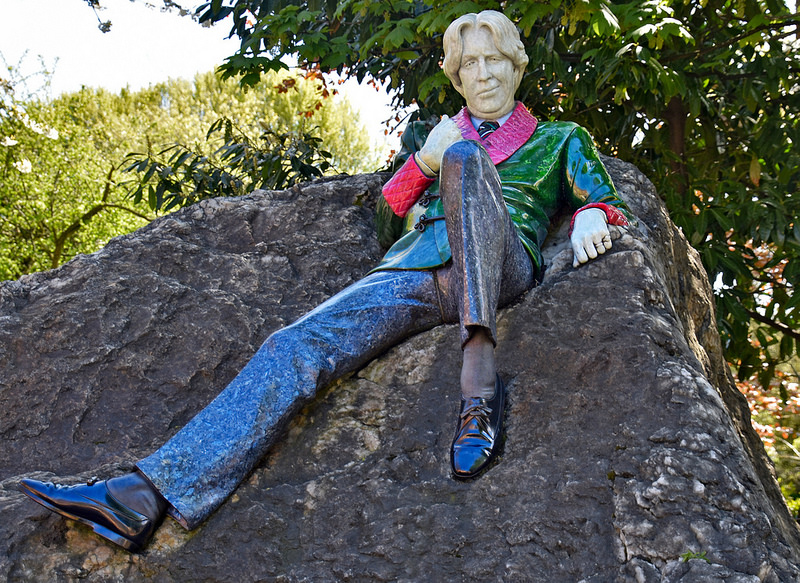