There is an embracing warmth and humour that seems to flow inexorably from the music of Leonard Bernstein – even when its sound world might be dazzling or confronting.  Led by John Wilson, with the Philharmonia Choirs and a stellar line up of soloists, the Sydney Symphony Orchestra dug deep for this music, sharpening their tonal palette to reflect its jazzy inflections.  The percussion section was sharp in scouring the music’s diverse rhythmic pulse, while the trumpets were resoundingly bright.  At time the brass writing recalled Walton and Britten, particularly in Bernstein’s only film score, On the Waterfront Suite (1955), which closed the first half of this tribute concert.  The taut dark world of the waterfront, with its deeply human confrontations, is beautifully and swiftly invoked, its opening measures reminding us that such tonal flecks of dawn had earlier been heard in the expectant opening of On the Town (1944).

The semi-staged scenes from various musical theatre works was nicely managed by Mitchell Butel and the vigour of the young male singers was impressive: Ryan Gonzalez, Michael Hart, Todd Keys, Matthew Manahan, Shaun Rennie.  The deep bass solo of the construction worker – ‘I feel like I’m not out of bed yet’ - brings memories of Kern and Showboat but the swagger and joy of ‘New York, New York’ brought forth the voice of a composer who revelled verbal dexterity and sliding trombone melodies.

The flow of musical titbits from this musical was nicely shaped with Julien Ovenden’s lyrical tenor floating the tender loneliness of ‘Lonely Town’, while Hildys’ raunchy solo about her cooking skills – ‘I can cook too’ - was full of droll double entendre, showing that typical slick feistiness that Bernstein’s’ women often display.  With superb diction, Kim Criswell's pin point mezzo and comic largesse was like a rocket that kept on giving, on a long flight to the moon.

There were also some rarities in this celebration including the two extracts from the highly unsuccessful musical that celebrates the White House:  1600 Pennsylvania Avenue (1976). With the Philharmonia Choirs in full voice, Ovenden rode their volume and crisply articulated the European imported food escapades of Jefferson: ‘The President Jefferson Sunday Luncheon Party March’.  The pulse of Charles Ives seems to throb beneath this brash and humorous march, a gem of  insistent rhythm.  This was followed by the beautiful soliloquy given to Abigail Adams – ‘Keep this house safe’ – invoking the still beauty of the empty White House and urging its protection as the heart of the nation.  This tender-hearted streak is a constant across Bernstein’s music.  Stephen Sondheim has said it was the dominant note when it came to Bernstein’s penchant for saccharine lyrics.

The Rosalind Russell inspired vehicle, Wonderful Town (1953), gave us another comic gem - again Kim Criswell - with its catalogue on how to lose a man. This was a pointed feminist shellacking of troglodyte man – half comic, half wistful. It earned an ovation. The tenderness of ‘A little bit of love’ was equally absorbing.  Its clear melody was floated with inspired simplicity by Lorina Gore.

The second half opened with a fizzing performance of the overture to Candide (1956/1989) – taken at a clip, but with every note in place and reminding us again of the rhythmic ingenuity of much of Bernstein’s music. This little masterpiece was followed by a heart-warming rendition, choreography and all, of that wonderful hymn to human adaptability: 'I am easily assimilated’. With words by Leonard and Felicia Bernstein, this show stopper seems to sing us into the heart of happy multiculturalism.  In its own slinky-shy way, the snappy cascade of musical and lyrical ebullience ushers us into a happy cry for acceptance. Criswell and her boys were nothing short of sensational, with the choir adding superb depth and swing to the swooning prescience of the music.

Candide is a masterpiece of musical invention.  Next, we were plunged into the doleful introspection of Rousseau’s forsaken hero: Candide.  Self pity, yes, but delicately etched with knowing candour and sung with absolute clarity by Julian Ovenden.

​This was followed by the coloratura excess of ‘Glitter and be Gay’ (first sung by the great Barbara Cook) whereby Bernstein echoes and outdoes Zerbinetta's glittering showpiece from Ariadne auf Naxos.  Lorina Gore gave this aria with broad bush vaudeville humour and stunningly accurate coloratura.  She delivered its satirical intent, even the breathy roulades, mid voice,  huffed and puffed with effect.  She made use of the all music’s structure and grand comic effect to push away the dark postcard thoughts that it opens with.  The audience erupted with pleasure at her triumph, as did some of the orchestra.

We then entered the territory of West Side Story (1957) – the Romeo and Juliet musical that still arrests and moves.  The riff from the gym scene was diamond cut in its contrasts and full of wide ranging dynamics.  It segued beautifully into ‘Maria’, the soft breathing of that wonderful name, which Ovenden minted anew, as the awakening of this young man, Tony, to the world of sensibility. Lyrics and music evoked the spirit of love reborn – though the rendition might have been a shade softer at times – hushed on its prayer like incantations. The ensemble of talented boys then gave us ‘Gee, Officer Krupke’ in all its high-powered energy and wit.  Its wide-ranging lyrics still resonate today, with references to cross dressing, drug abuse and the web of social welfare and social diseases. The house erupted with pleasure again.

The next adventure was encountering an extract from Bernstein’s’ opera, Trouble in Tahiti(1952). Once more we experienced his dexterity in setting overflowing verbal text that magically instantiates  volubility and vulnerability.  Kim Criswell delivered a tour de force of physic energy, accompanied by the  Choir mooning forth the swaying palms and post-colonial splendour, while Lorina Gore and the other soloists echoed the hellish narrative of how 1950s America viewed itself, in almost schizophrenic delight, deeply conflicted, crazily sad. All very Sondheim, all very arresting.

Then came another rarity – from Peter Pan (1950).  Lorina Gore essayed its lullaby – ‘Dream with me’ – with pure line.  This number is almost Disney, Kensington Gardens in its delicacy and nostalgia.  All rather strange given Bernstein’s criticism of Britten’s’ Midsummers Night Dream– with its dark slippery music that Bernstein thought was much too nursery book!

The program ended with the blossoming forth of the finale from Candide:  “Make our garden grow’.  The massed soloists swelled above the orchestra to deliver an aching simplicity - both declaration and desire - that one suspects Bernstein often sought.  The craft and beauty of this rising prayer creates power beyond its simple means and reminds us that music always has the power to inspire a better world.

Lorina Gore and Kim Criswell then essayed “America’ as a sassy encore – with many of the young audience singing along.

Wilson understands this music and delivers in spade the crisply articulated thrust of its snappy themes.   This was a wide ranging and satisfying taste of Bernstein music. The orchestra swung. 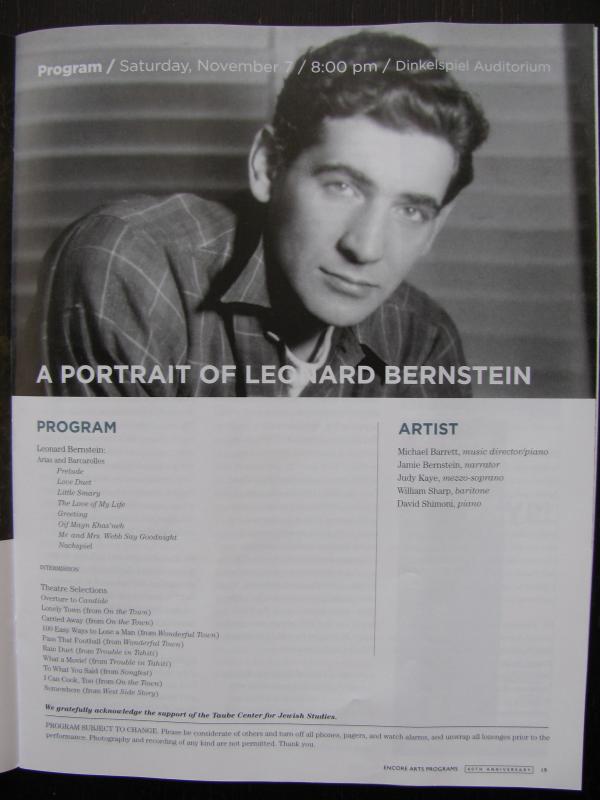