It is very hard for Australian audiences to see and appreciate Debussy’s unique operatic masterpiece, Pelléas et Mélisande, given that it has only had four outings in Australia since its premiere in Paris 115 years ago and it’s 19 years since it was last seen on an Australian stage.

In this concert performance - given by the Sydney Symphony Orchestra with a rostrum of exceptional soloists, all led by the Swiss conductor, Charles Dutoit – Debussy’s profoundly beautiful music and the strange yet powerful ambience of its story and characters were distilled with exceptional clarity. The work was given in its original French with clear and effective surtitles.

This was a long night in the concert hall and some of the audience left after interval.  Great music requires stamina.  Those shirkers missed a stunning Act 4 where the would be lovers finally sing together in deep rooted ecstasy, with the deceit of husband/brother deeply etched across the orchestral palate as the haunting sounds of Golaud’s dread and jealousy stalks their love declaration.

As the two lovers, Sydney was offered clear and radiant singing by Michaela Selinger (a late replacement for the often decamping Sandrine Piau) and Elliot Madore.  His singing of Pelléas was a revelation.  With vocal and emotional skills he deftly and intoxicatingly revealed the love lost young man.  His high baritone (Baryton Martin) is a febrile instrument, suitably burnished but able to fleck the words with meaning, inviting us into his imagination and innermost feelings where soft sound elides his emerging passion, while also making dramatic sense of the childlike quality that Golaud sees in him.

Selinger is a mezzo-soprano but had no problems with voicing the restrained soprano tones of the girlish Mélisande.  The disarming/threatening nexus of this character’s reticent bearing was carefully modulated across her various scenes.  Her voice grew in strength as did her characterisation across Acts 1 to 4 until all crashes down at the murder of Pelléas when she shatteringly declares she has no courage, “Je n'ai pas de courage!”, and runs away.  We understand sorely that she is the eternal outsider.

Marc Barrard was the experienced Golaud.  His strong baritone was effective in summoning the wilful jealousy that overtakes this character’s reason. His unhinged violence towards Mélisande in Act 4 Scene 2 was tumultuous but understandable, as was that strange scene where he forces his son, Yniold, to spy on his wife and brother:  Act 3 Scene 4.  Debussy’s music so artfully paces his rising discontent as, with violence and fear, he presses his confused young son to confirm his father's piercing suspicions.

Julie Mathevet as Yniold bought a fresh, bell like quality to the young child’s confused responses, capturing both his innocence and fear.  Likewise, the scene when Yniold encounters the flock of sheep was artfully disarming and strangely portentous.

Anna Dowlsey’s rich dark mezzo gave nice contrast to the brighter mezzo of Selinger’s Mélisande.  She welded gravitas and humour to her assumption of Genevieve, the mother of Pelleas and Golaud.  The scene in the garden outside the castle, when she walks with Melisande and discourses on the gloomy forest and its splashes of light and impending seascape, was disarmingly beautiful – “Regardez de l'autre côté, vous aurez la chlarté de la mer”.  The Philharmonia choirs supplied beautiful washes of colour as the ship and its sailors leave the landmass.

Jérôme Varnier as Arkel was vocally resplendent, though one had to work a bit to picture this tall, slender, handsome man as the ageing King.  His reticence and compassion for Mélisande was tenderly portrayed in Acts 4 and 5.  He is a seasoned performer in this role.  The voice is rich, strong and black.  His bitter sweet narration of Mélisande's soul departing her body was poised and ached with feeling – “L'âme humaine est très silencieuse…L'âme humaine aime à s'en aller seule”

Daniel Sumegi and Simon Lobelson were effective in their minor roles, Doctor and Shepherd respectively.

Maestro Dutoit and the SSO gave a clear and passionate reading of the score.  The delicacy of the orchestration is fabulous to behold, as various imaginative intersections of instrumental colour unfold, underlying both text and characters in a way that draws us further into this imaginary world where all the protagonists are firmly immersed in their imaginings.  The SSO woodwind section delivered sensuously beautiful sound.

The various orchestral interludes, forced on Debussy to cover for the reality of scene changes, were highlights of this performance, particularly the passionate interlude of Act 4.  The finale of Act 5, with harp, muted trumpet and tolling bell was a pointillist benediction darkly rumbling us towards the infinite – and almost suspended in time, al a Schubert.

The ambiguity of this work – who really is Mélisande; who is the unseen father of Pelléas; why does Golaud never get the answer he seeks – is almost post modern in its perplexing beauty, but as Mélisande so deftly and sweetly sings: love can never be guilty.  That challenging, bitter sweet thought seems to sing us deep into Debussy’s heart.

This was a wonderful experience, but it undoubtedly invites the question when in Australia shall we see this haunting opera fully staged? 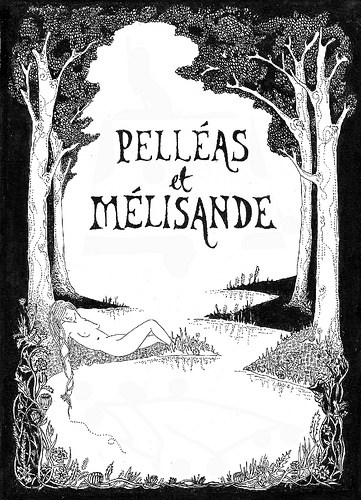