Pageant and kaleidoscope for the drug addled genius

New Australian operas are always worth exploring.  The well-funded national opera company, Opera Australia, does them very infrequently but with commitment and panache.

Elena Kats-Chernin’s new work, Whiteley (2019), is full of powerful and varied music. Its eclectic sound world creates a febrile portrait of this iconic Australian artist.  One hearing is not enough to explore this music’s intricacies.  The libretto is another matter.  The First Act fails to deal with the wilful compression that opera demands.  At times it feel like a travelogue:  Brett was here, so to speak.  It is full of short scenes that often fail to build interest and tension.  The episodic nature seems inclined to chart key details of the painters life without allowing for any extended engagement with his persona and the emotional forces that drive his addictions.

Drug addled painter as central focus should not be a problem, given opera’s rostrum of loved-crazed characters.  But at times, the dogged drunkenness and brain addled fits were a little too monochromatic and ever present to induce sympathy.  Sometimes the central character recalls Werther and his obsessive nature, while Whiteley’s brief attempts to explain his obsession with beauty, offered hints of Britten’s Achenbach. Unfortunately, the First Act gave us limited emotional and psychological  material to build a convincing portrait.

The homage to his obsessive male heroes was patchy in the extreme. The link to Piero Della Francesca worked via the beauty of its visual projection onto a huge screen, while the Cafe Royal bar scene with Francis Bacon was flippant and distracting. The invoking of Baudelaire – the reading scene with Whiteley and his fellow artist and best friend Joel Elenberg (Richard Anderson) - was tender enough but neither action nor music could discover what might have been an ecstatic hymn to the obsessive love of colour and form. The crazed spiritual aspects of the painter were not effectively mined – one yearned for some of the beaute of Les Illuminations.

The vocal line for Brett Whiteley (Leigh Melrose) has some nicely amplified vocal ticks and head voice humour that imitated drunken speech patterns. The composer captured the fidgety nature of the obsessive genius and seemed to riff on Melrose’s burnished baritone to fine effect, with a reflective, sinuous line that invited interest.

In the First Act, it was only in the  Rillington Place Murder recollection episode that we began to experience the extended reach of composer and librettist, as they delve into the essential responsiveness of this artist by making extant his exploration of evil. Music and staging made perfect sense of the enormous portrait that we see following this heightened recollection.  This was overwhelming powerful musical theatre – almost recalling flashes of Prokofiev and the Fiery Angel.  Its depiction of violence against women was viscerally staged, with powerful choral writing and chilling visuals that take us firmly into the midst of the creative impulse.

Unfortunately, after this peak, we then amble off to Fiji and the realms of lush intoxication.  Here was  music of a balmy shimmer and the voice of the young Arkie (Natasha Green) who bought a simple beauty to her utterances in this drug induced paradise.   Yet, dramatically, this seemed a letdown, dug even further into our consciousness by the cheap laughter it invoked when the  Whitley’s are being exiled from their paradise for a drug offence.  All heightened emotion was shattered on the one word codicil of "bugger”: like a television commercial valorising corny Australiana.

Act Two, after the lame musical comedy opening of the return to Sydney (viscerally staged with digital projections of Sydney ferries), created greater tension and interest – though again so many minor characters seem to get in the way of our increased engagement.  The character of Michael Driscoll (Nicholas Jones), Wendy Whiteley’s lover and Brett’s drug companion, was apt for a bit of vaudeville, not much more. The cameo interventions of Patrick White (Gregory Brown) seemed didactic and unmotivated by dramatic sense – except in terms of potted history.  The Tate Gallery and Sydney party scenes were well staged  These episodes flashed by with much colour and movement and were well choreographed, given the small size of the stage and the sheer number of singers (David Freeman – Director).

The pageant style of presenting the golden year (1978) that Whiteley won three major national art prizes  (Archibald, Wynne and Sulman) was well managed, relying on the splendour of his art work and its daunting oversize presentation.  The same effectiveness came with the burning fire presentation of his addiction,  effective in both its visualisation and its music. The latter created a trio between Wendy (Julie Lea Goodwin), Brett and their grown up daughter Arkie (Kate Amos) that tore at the heart strings with its crisp depiction of the disintegration of a loving family.  This episode also instantiated some of the reasons for Whiteley’s addiction to heroin and the creative impulse it drove.

The still beauty of the death watch in Bali, where Joel goes to die,  surrounded by the ever watchful Brett, was nicely tangential and piquant, but it could have usefully instanced greater musical depth by building on these characters’ interactions instead of presenting a somewhat static tableau. Opera can open up such scenes via ensembles that transfix and support our emotional engagement, but at times one senses a timidity from this composer, as though biographical elucidation was the primary focus of this work (all the shining light of poster art) and not the transcendent.

The blazing white scene between Arkie and Brett in the Japanese Zen Garden seemed more engaging, presenting the calmness of betrayal and the intellectual pinpoint of Whiteley’s addiction: either running towards it or running away.

The frenetic nature of this work’s episodes left a haphazard trail of engagement.  Sometimes biographical narrative triumphed, sometimes visual splendour, sometimes music. But not often in synch.  The beautiful visuals of the bathroom scene – Wendy naked, Brett sketching - and the presentation of the painting it inspired, was over in a flash, without much musical discourse.  Again, we encounter a sense of pageant and tableau – all breathless with disengagement. The death of Brett seemed incidental in the scheme of things – another passage of time to be passed through in this kaleidoscope of the painters’ life – without much mourning or sense of loss.

The end of the opera is beautiful:  a glorious trio, that seems like a benediction on the lost life of this fabulous painter.  Wife, mother (Domenica Matthews) and daughter invoke the peace of the harbourside garden, channelling echoes of “Hab’ mir’s gelobt” (Rosenkavalier) and Britten’s transmutation of that in his Peter Grimes (“From the gutter, why should we Trouble at their ribaldries”). This was an effective finale, but hardly dramatically linked with the unfolding life of Whiteley.  Words and music, did however summon the distinct ambience of febrile emotion a fitful occurrence across the opera.

Leigh Melrose delivers a staggering performance as Whiteley.  His stamina and frenetic engagement with this Petrushka like character were exemplary. Julie Lea Goodwin in the role of Wendy radiates strength and vivid beauty – and at times vocal splendour.   Her role as strong muse is nicely delineated, but maybe the 21st century and the #MeToo movement have blunted the attraction of the blousy male rock star. Some of this negativity is attenuated by the depth of his love and desire for his wife.  Yet, on balance, Wendy too often seem to be following his puppy dog shadows.

The choral writing in the crowd scenes is vibrant.  The episode of the Tate Gallery purchase was well managed, nicely reflecting on the gaucheness of the Whiteley's while showcasing the beauty of his  ‘Untitled Red Painting’ which floods the entire stage. Visually, we experience his profound understanding of the heroic Australian landscape and marvel that one so young is flooded with such success:  a dramatic rather than a musical highlight.

The visuals of this production are thrilling, showing yet again the strength of the twelve large digital screens that OA now employ in many of their productions. The presentation of one of his famous paintings was invoked as Whiteley splashed buckets of paint before our very eyes – simple and effective - bringing forth some of the mysteries of creativity and the stunning blue of his harbour scenes (Sean Nieuwenhuis – video and projection design). The costume design (Dan Potra) offered a vivid array of colour and period inflection.

Tahu Matheson conducted this newly minted score with attention and conviction – and received splendid responsive playing from the Opera Australia Orchestra.  The orchestra are given many and varied opportunities to shine – whether on solo viola, discursive percussion, bold brass interventions or  commenting piano (voice of the composer?).

Opera Australian should be congratulated for supporting the continuing development of one of Australian most loved composers in her quest for an operatic canon. 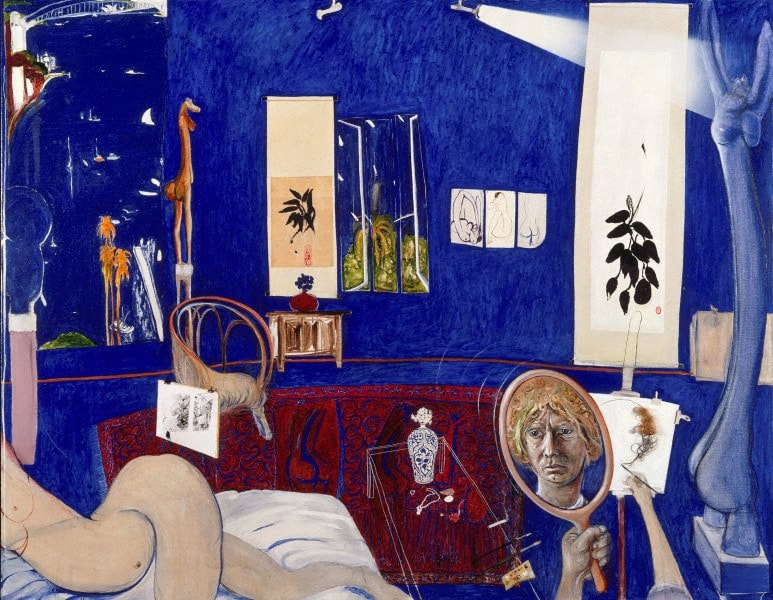