In a restudied production (2000 – Moffat Oxenbould), the Australian Opera has assembled a fine cast of singing actors.  They bring clarity and intensity to this dramatic score.
.
Boccanegra, the Doge of Genoa, is one of those great baritone roles in which Verdi invests tremendous variety and vitality – tied together by the character’s yearning for peace and an end to hatred. His stark message reverberates in 21st century Australia when racism seems to fracture the body politic with alarming regularity.

The Council Chamber Scene (Act 1, Scene 2), created by Verdi in the latter revision of the score, is expertly plotted across public and private domains, bringing sexual tension, familial love, patrial hatred and fractious political alliances into vivid play, buoyed by an arc of music that makes the orchestra almost shudder with meaning.

Within that arc, the great cry for peace  (E vo gridando pace!), launched by Boccanegra and taken up by his daughter Amelia (Maria), floods the stage and each participant in the drama listen to its vibrations.  Verdi’s genius in concerted numbers, evident from his early years (Nabucco), is on full display. The delineation of character is studded throughout this noble ensemble bringing father and daughter closer together, separated by her lover (Gabriele) and her grandfather (Fiesco/Andrea) with the devious Paulo illuminated on the side, as his plotting unravels before our very eyes.

The manner with which Verdi ends this extended scene is undertaken through the simplest of means, as Boccanegra turns on Paulo and forces him to curse himself.  In this staging, the savage whispered maledezione, sung by all, hangs in the air as the act ends with a near public humiliation.

As Boccanegra, George Petean was fully across this herculean role, signalling the proud warrior, grief struck lover, father, statesman, sometimes plain angry, sometimes bluff, but distraught as well, and in the recognition scene (Act 1, Scene 1) almost suffocating with joy as he discovers his long lost daughter.  At the end of this scene his uttered Figlia is invested with extraordinary meaning as the profundity of the moment almost breaks the word in two.  One suspects that Verdi, father of two dead children, drew on deep wellsprings for this moment.

As Amelia, Natalie Aroyan (a replacement for the costly and indisposed Barbara Frittoli) matched Petean all the way with pure, openhearted singing and carefully gradated emotional steps as they paced around each other, unravelling their truth and the climax that Verdi reserves for the discovery that they truly are father and daughter.  Verdi was to use similar overwhelming force in the love duet in Ballo in Maschera.

Giocomo Prestia, as the implacable enemy of Boccanegra (Fiesco/Andrea – patrician to the plebeian Doge), judged the various phases of that character’s development with fine grace and ample voice.  His solo in the Prologue (Il lacerato spirito) is bathed in compassion by Verdi, as the father curses the Virgin Mary for letting his daughter die and then prays for heaven’s mercy on her soul.   This is music that vibrates with grief, as does his duet with Boccanegra in Act 3 when he discovers that his enemy is no longer his enemy and weeps forgiveness in the face of impending death.

Diego Torre, as the impetuous Gabriele Adorno (patrician lover), gave a sterling performance, particularly effective in his Act 2 solo when he contemplates Amelia’s supposed infidelity and is overwhelmed by his desire for revenge on both her and the Doge. The range of emotions and vocal resources that Verdi demands were all delivered by this protean, pint sized performer.

The chorus of the Australian Opera were in fine voice, particularly in the Council Chamber Scene.

The orchestra responded to the agile direction of Renato Palumbo.  His understanding of the score was impressive, delivering a wide range of dynamics and attention to detail, mapping the ebb and blow of this dark work.

Warwick Fyfe as the scheming Paolo presented another of his fine characterisations, giving the crazed deputy all the Iago like characteristics that Verdi and Boito invested him with.  Fyfe let us understand his skill as a political schemer as well as his obsessive desire for Amelia, his diffident stance undercutting his acute self regard, while his fine baritone voice shone out in splendour when required.

Adrian Tamburini as his offsider, Pietro, provided a more humorous ruffian and sang with ease.

Thank the gods that Verdi and his librettist Boito revisited this work in the 1880s and restored this opera to its place in the Verdi canon.  Like Rigoletto and Macbetto, Verdi has created a baritone role of stupendous power and complexity delivering a message that cuts across the centuries:  reconcile or risk the terror of unending hate. 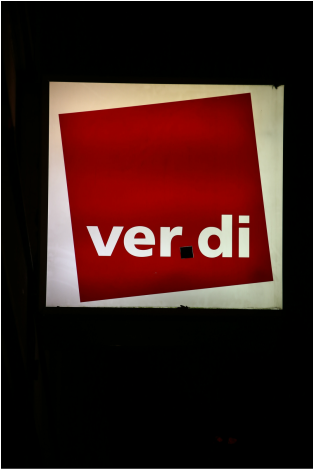