THE POWER AND PASSION OF ITALIAN PRAYERS

At the Concert Hall of the Sydney Opera House, the Sydney Philharmonia Choirs, Orchestra and Soloists presented an interesting program devoted to Italian operatic composers in prayerful mode. The composers on display were, Rossini, Verdi, Donizetti and Mascagni.

The presentation of Rossini’s formally beautiful prayer from Mose in Egitto (1818/1819) – original Italian version – is full of slow propulsion as though the Israelites are willing the Red Sea to open through their sheer waves of sound.  The soloist and massed choirs gave it the grandeur its simple beauty entrails.  In this opera, this music rightly delivers a miracle.

This work was followed by the oath duet from Act 2 of Verdi’s Don Carlos (1867/1884), set in the Monastery of Saint-Just.  This is not only a well known duet but also a fine grained interaction that naturally progresses the drama.  Jaewoo Kim’s pure tenor voice could not claim the Italianate gleam and heft required of this duet (sung in Italian and not the original French) while Warwick Fyfe’s baritone was strong if a little muddied in terms of diction.  The power of this scene was, however, well established with the exchange of potent secrets (I love my father’s wife) to the plotting of treason (how shall we force the King to grant religious freedom to the Flemish, when the King burns his ways through Flanders?)  Though the grave intoning of the mysterious monk (bass) was missing from this performance, the mass choirs ensured suitable gravitas underneath this extraordinary conversation between two pillars of the ruling class on the road to perdition.

The long scene from Act 1 of Bellini’s Norma (1831) - that great questing and testing bel canto opera - gave us much of the radiant beauty of this famous invocation to the chaste Druid goddess.  Taryn Fiebig was very convincing in pitching the unique melisma and soaring line that Bellini casts over this prayer, Casta Diva.  Her voice can sometimes be breathy and occasionally lose emission, but in this performance the sound was glistening and pure – and rose above the Philharnonia Orchestra.  It touched on memories of some of the great performances.  What wasn’t there in the cabaeltta, Ah! bello a me ritorna, was the coloratura soprano's tight gruppetti and clearly articulated grace notes.  The scales were approximate.  The treacherous demands of this role on the stage would not be a natural fit for Fiebig’s lyric voice.  The chorus and orchestra were finely attuned to the drama in this scene, which ends with a soft inward take on the warrior's march and leaves its questions hanging in the air.

The prayer from Donizetti’s Maria Stuarda (1835) was given with drama and pathos by Jacqueline Dark, her rich glinting mezzo delivered shafts of stabbing pain in this concerted number, as she rises above the huge expanse of sound rumbling from the choirs, all praying for god’s mercy, as the Queen awaits beheading.  In this case, no miracle arrived for the doomed Queen.

The first half of the concert ended with a thrilling performance of the Easter Hymn from Mascagni’s Cavalleria rusticana (1890).  This prayer of belief was given sharp focus and richness by the combined choirs – a prayer of belief that in the opera signals the unfolding of the tragedy: a duel and a death.

The concert began with a crisp performance of Verdi’s overture to Giovanna d’Arco (1845) that gave a particularly nuanced reading of its middle section where woodwinds hint at the innocence of the young Joan and the bucolic surroundings of her humble country living.  It might  have been interesting to hear Taryn Fiebig sing the prayerful aria of Giovanna from Act 1: O fatidica foresta.

The second half of the concert was devoted to one work.  The Rossini Stabat Mater is a fascinating hybrid.  It is comforting and startling, operatic and devotional.  It is recognizable Rossini from the primo ottocento operas, but offers up experimentation that runs onward to Verdi and dare one say it, Wagner.  Its charm is heart-warming, its orchestral cadences at the end of certain movements are totally arresting and mood altering in a way that almost feel post-modern.

One can see why orthodox religious musicians, particularly the English scholar type stultified by tradition, would loathe the Cujus Anima (Movement 2).  Far too bumptious, but what a stretch of glorious melody and surprising progression, with that integrated High D reminding us of the power and beauty of Arnold's Act 4 aria in Guillame Tell (1829): "Asile héréditaire”.  Jaewoo Kim was superb in this movement, his pure ‘white’ tenor in perfect placement as he navigated the movement’s perils with shining vocal grace.

The Eia Mater, fons amoris (Movement 5), with stilled exchange between bass soloist (Warwick Fyfe) and chorus was arresting, even bordering on the playful at times, but also moving as the potential of the text was lobbed between solo and massed forces: "Touch my spirit from above".

The Cavatina, Fac, ut portem Christi mortem (Movement 7), was richly intoned by Jacqueline Dark, vivid in its response to the text - "Sleep my soul till it has swooned in his very blood".

The Aria, Inflammatus et accentus (Movement 8), is startling and drolly beautiful.  Taryn Fiebig handled its wide-ranging vocal demands with aplomb – and if she could not erase memories of that glorious ancient recording by Florence Austral, she did articulate its power and benediction, placing her lyric voice across the arc and weight of the score with grace and meaning.

The last movement almost summoned the dead in a vast triumph of belief.  To hear hundreds of choristers in this thrilling fugue was to reflect on the delirium that often invaded Rossini’s operatic finales.  But this was a darker sound and celebrated in rising crescendos the elemental faith of the Christian church.  Starkly displaying Rossini’s potent use of stillness, the Amen suspended in air on its two syllables was simple but effective drama.  The final section set up  a powerful chain reaction in both choirs and orchestra.  The joy of this belief was, in its mixture of power and uplift, shaded now and then by the softer cadences of doubt.  The mystery of Rossini’s supreme gifts for subtle humour and beauty were on full display.

The Orchestra was led by Fiona Ziegler.  The players gave delicious point to the subtle scoring of Rossini - the episode of the doubles basses with their ghostly accompaniment to the choirs was a particular highlight.

The conductor, Brett Weymark, led soloists, orchestra and choirs on an integrated performance that caught the Italian pulse for heightened living with true elan. 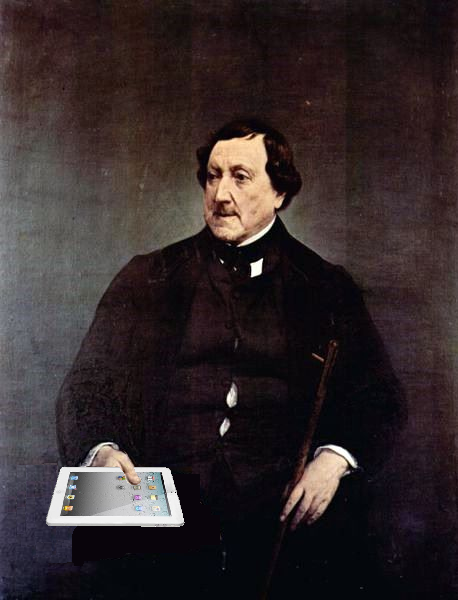