The cumulative power and searing intensity of Alban Berg’s Wozzeck (1925) is both a dazzling and draining experience. The dissection of an everyman Austro-Hungarian working-class troll is clearly stepped across 15 scenes, that inexorably chart the dissolution of a fragile man.  It begins with intimations of class schisms (“wie arme leut” almost prefiguring “erst kommt dass Fressen, dann kommt die Moral” from the slightly later Brechtian cannon) and unravels towards the forlorn search for the bloody knife that has killed his common law wife and now lies at the bottom of the watery mass that he drowns himself in.  We are presented with a visceral articulation of alienation, indifference to the value of human life and masculine rage/peacockery all roiled around dissonant but powerful music.

This production is staged across a brilliant and rickety set – almost instantiating the rotting structure of the Austro-Hungarian state.  The ever changing and dazzling projections of William Kentridge (Director and artistic designer) take centre stage – with the drawings and assemblages sometimes bathed in dappled but iridescent light. The awkward mechanistic nature of the illusions is then mirrored through the choreography and puppetry in the production (Andrea Fabi/Samantha Hickey).  The young boy, fruit of the union between Marie and Wozzeck, is a wooden boy, like Pinocchio, with his linked joints mirrored in the fractured movements of the miming actors and the bizarre projections of the automaton horse.  Many of the shadowy projections are dreamlike and nightmarish. The lighting (Urs Schoenbaum) forms a key component of the overall feel of a forcefield that induces alienation.

The intensity of the visuals, which occasionally has the propensity to overwhelm, is matched in the singing and orchestral playing.  The work was performed in one long uninterrupted arc.

Michael Honeyman is frightened and frightening as the disintegrating peasant solider, Wozzeck. He has no central self, but what little wellbeing he holds together is pecked at from all quarters: he is like a troubled scarecrow, haunting no-one, but flailing against the wind and rain.  His singing was fulsome, his diction gaunt, his costuming allowed him to be spotlight amongst all the swirling colour of Kentridge’s hieroglyphics.  He is constantly fleeing his demons.

His performance was beautifully matched by Lorina Gore as a vibrant Marie, her strength of character, vulnerability, love for her bub and desire for pleasure were flecked around her pure and fulsome soprano.  The lullaby and bible reading scene were particularly rich in meaning – ameliorating some of the misogynistic bias that floats across this work. Her spirited encounter with the Drum Major was full of simple lust and joy.  The swaggering Major was nicely etched in this performance, like Escamillo, full of braggadocio, but also underpinned by crude masculine violence, directed at both Marie and Wozzeck.  The downtrodden make easy victims.  The tenor of John Daszak was clear and robust.

The Captain was a tour de force of controlled propriety, hectoring invective and poisonous thoughts, launched on the high tenor of John Longmuir.  This strutting bantam hen was configured via a glorious plumed helmet.

The Doctor, all beard and sagacious bass voice, was drolly undertaken by Richard Anderson, who ensured the disassociated feelings of medical science were nicely dissected in Act 1.iv when the interplay between medical researcher and mental health specimen ushers in a stark reminder of the power imbalance between the dolorous and trusting Wozzeck and his magisterial ‘healer’.

All the minor roles were carefully cast and rethought.  Dominica Mathews was crude and wracked with dark humour as Marget – sweeping the floor like a haggard, ageing Cinderella.  The cameo of the madmen, sniffing out the import of blood, was well sung and as always, a portentous expressionist touch in this symbolist drama.  The rugged normalcy of Andres was solidly acted and sung by Virgilo Marino providing deep contrast with the troubled Wozzeck.

The Inn scene (2. iv) with its klezmer stage band, roiling chorus and peculiar hunting song was full of enormous contrasts– all finely pitched by singers and orchestral ensemble.  The humming of madness pinged its way into our consciousness.  One could feel the influence of this remarkable scene reaching out to Peter Grimes (1945) and a related communal energy and emerging suicide.

The murder of Marie under a blood red moon (that startling long crescendo shattering the night) and the later suicide of Wozzeck in the murky waters (trying to wash away her blood) seems strangely destined and strangely normal.   Like Auden and Icarus’s fall from the sky, no one particularly notices or cares.   Wozzeck’s death throes are but a blip on the landscape – a lost note of middle class morality as the Doctor and Captain avoid its echo.  But the orchestra does notice and its powerful commentary on all the undercurrents of small lives and brutal living was skilfully delivered under the conducting of Andrea Molina.  The crushing power of the brass crescendo of the final interlude was enormous and skilfully gradated – while the beauty and poignancy of the viola solos was spotlight with a clarity that almost implied the cathartic watching brief of the composer upon this tragedy.

The final scene of this opera is always moving – as the next generation of cannon fodder is parcelled up in austere childish reflection. In this production, the little puppet boy rides his crutch and then collapse into lifeless stupor – so like the horse in the thrall and charge of the massacres that were to come upon Europe in the fallow fields of Flanders.

Wozzeck remains a deeply challenging and disturbing opera – but its structural integrity is profound and its humanity is starkly revealed. This production ensures the labyrinthian torment that dying societies unleash is given with starling clarity in the music – and disorienting beauty on the stage.  A night to remember. 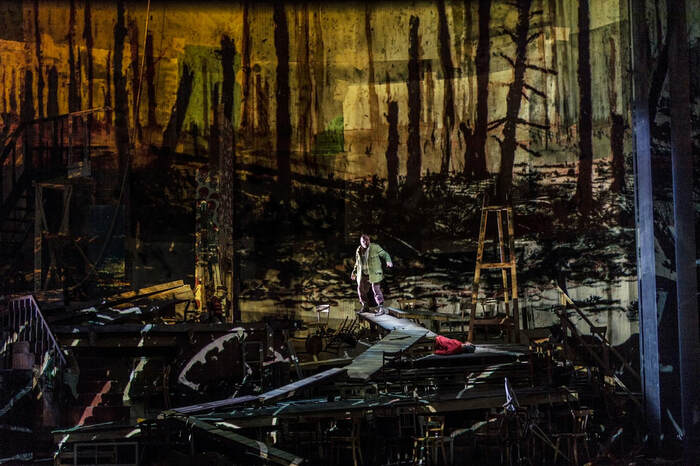