Dario Fo’s Can’t Pay, Won’t Pay (1974) is given in a new adaptation by Marieke Hardy.  The play was scattered with contemporary topical allusions, but retained the manic pulse of the original and some its political ambience as a Marxist farce: the grind of working class lives, the insecurity of employment, and, to great comical effect, the well spring of ignorance and fear that certain men have of women and their bodies.

The women of this play, Antonia and Margherita, were richly contrasted. Helen Thompson was in her element as the strong willed Antonia.  She is a marvellous actor in comic tropes, the querulous, angular vowels works so well.  Here, she naturally steam rolls the prim Margherita (Catherine Van-Davies) into a more fulsome life, inspiring her emergent sense of rebellion.  Their differences and relationship were beautifully charted across the production.

There was sublime inspiration in the writing and performance when the two women were induced to improvise the history and observance of an imaginary Saint’s feast day: a saint of fecundity! With Margherita almost levitating above the bed, and Antonia urging her to extreme embellishment, the crazy amplified incantations of this scene were true comic gold, forcing the aggressive and querulous Inspector to reach deep into his incredulity.  Yet, each point of doubt was stupendously checkmated, until his mind and body was contorted into collapse, comatose with stupefaction and blindness, and soon to be pumped with the gas canister that lights the cooking.  When his stomach exploded into  a gross display of excess wind, the words of Verdi’s Falstaff hovered in the ether : "si gonfia e poi crepa" (puff up and burst).  The women struggle to hide him in the cupboard – ready to fall down - as the men return with their contraband booty from the overturned lorry, now hidden a coffin which they heave into the other side of the cupboard.  As the play progresses, the men discover they are going to be made redundant, so their resistance to unilateral action withers on the vine.  The sexes are edging towards the same denouement, where all is unravelled and the forces of the law are dispatched outside the home - for another day, at least.

The physical comedy is a delight.  Margherita hiding the stolen supermarket goods under her coat and feigning pregnancy - like most of the apartment block's donna - was richly detailed in performance and staging.  The pretend breaking of her waters, the collapse of a bag of olives and their briny water across Antonia’s kitchen floor was borne on a flow of delirium, ending as Margherita is swiftly bundled off to the maternity hospital by the suspicious Inspector.

Antonia’s husband, Giovanni, is the upright communist, committed to dialogue, rules and the chat of men across the negotiating table. So, he is disapproving of these other awful women taking unilateral action – protest has to be organised and legal! Glenn Hazeldine charts deep comic intent in his assumption of the kind and somewhat befuddled husband.  His cleaning of the kitchen and his stupefied mime when his co-worker Luigi eats both the dog food that Antonia has stolen - in tandem with bird seed and rabbits head that form the ongoing sight gag of the fomenting stew - as well as the olives of the near biological partum is wackily and wickedly funny.  Giovanni’s neat body and neat ways are deliciously challenged by the stolen food – and the visceral temptation that the real meat of the can of dog food makes to his sense as it slowly elides from the tin is brilliantly realised.

Luigi (Rahel Romahn) added to the comic generosity of this production by consuming both dog food (“nice paté”) and his wife’s olives - as he tried to deal with the concept that he is famished and that his wife might be pregnant!  The competing urges were visibly in action across his body and face.

Aaron Tsindos produced two plum comprimario roles as the Sergeant sent to search all the apartments for the grocery items liberated from the store by the frustrated women,  and his doppelganger, the hard-edged Inspector.  As the Sergeant, his lanky bearing and droll enunciation of his left wing sympathies was full of gleaming double takes, slashing diction and pauses.  His turn as the Inspector brought a knowing nastiness into play, but one that was constantly punctured by the evasion and invention of the women.  His Old Man was less convincing – pantomime stock – while his Undertaker was visually arresting, giving us a shape shifting cameo.

The Director, Sarah Giles, kept the farce roiling – like the stew on the cooker – but built and lessened intensity as the script demanded, within its overall manic pace.  The breakdown of order after Act 1, when the stage hands go on strike, was wittily navigated, as half of the massive set (Charles Davis) was moved into place  by the actors and certain locations were improvised and semaphored to the audience.  The design of the apartment block was substantially real, while décor and costumes were chicly time bound:  the pink bedspread on the marriage bed, and the Virgin Mary sailing above, were built on a quirky, crafty realism.  The lighting design (Paul Jackson) was suitably vivid.

The production ended with a performance of the protest/partisan song, Bella Ciao, which was written in testament to the grind of working class lives:  “and every hour we pass here/we lose our youth".  This was a feel-good end to the shenanigans of the play and framed some of its politics, but lowered the manic and aggressive stance a little: maybe to leave the middle class audience stirred but satisfied.

At the core of this very funny play is the key concept of resistance.  As Yanis Varoufakis states in his commentary on the play: in “the total collapse of the social contract between the government and the governed, citizens find it easy to declare  that justice requires fiscal and civil disobedience”.  In his writing, Fo ensures that this message is not lost. 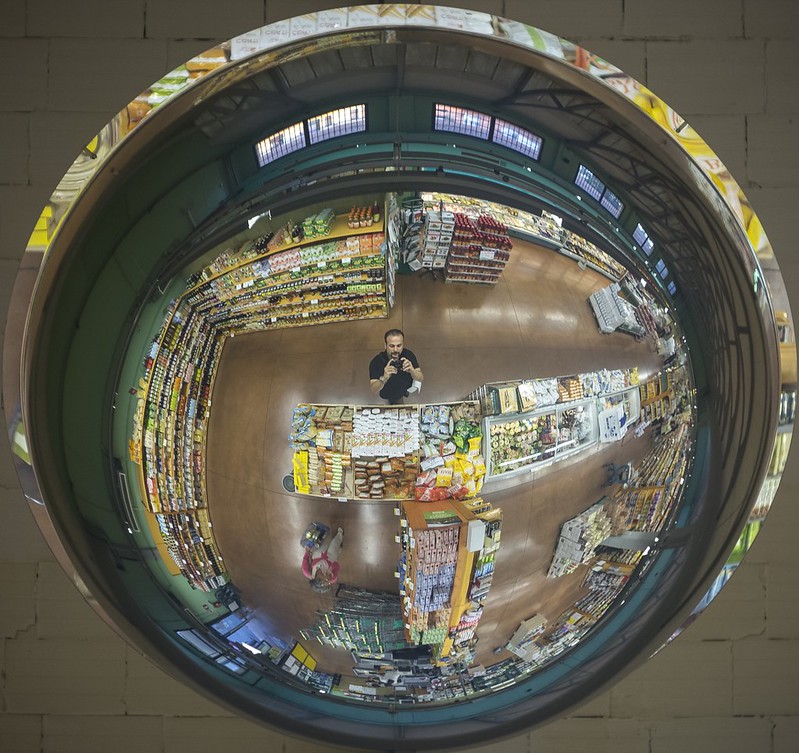