Directed by Brett Weymark, this fulsome concert gave us the Fantasia on a Theme of Thomas Tallis (1909), the Five Tudor Portraits of 1936 and the Serenade to Music (1938).

As Rachmaninov emoted at its premiere, the Serenade is one of most beautiful pieces of music ever written.  Its deft marriage of word and song produces a crystalline beauty that is tender but never sentimental.  This was the version of Soloists (4 singers as opposed to the original 16) and massed choir, with piano and string orchestra.

Its orchestral prelude, full of the harmonies of the peaceful star filled night - “soft stillness of the night”-  was beautifully played by the Sydney Philharmonia strings, setting out the thematic material of the piece with clarity, while unfolding its nocturnal beauty: “how sweet the moonlight sleeps on this bank!”

This is sensual music, gifted to lovers (VW was deep into his affair with the married poet Ursula Wood during its composition), so naturally it flourishes the musical lover’s clarion call: “with sweetest touches pierce your mistress’ ear/And draw her home with music”.

The solo violin playing by Fiona Ziegler was rapt and pure.  The four soloists sang with distinction, with generally excellent diction and pure emission.  Morgan Balfour (Soprano), Bronwyn Douglass (Mezzo), Evan Kirby (Tenor) and Jarvis Dams (Baritone) blended nicely in concerted moments with each other and the choir.

At its conclusion, the return of the soaring line “of sweet harmony” by the soprano was a fulsome benediction, praising the soft delights of love and music and almost bedding the words on downy sleep as the strings steal in with their night-time vigil.

The Tallis Fantasia was nicely sprung, the second chamber orchestra in the organ loft bringing antiphonal richness as the piece built in intensity from its soft low strings.  The yearning in this music was nicely tracked by the orchestra.  One didn’t notice the relatively small size of their forces, as the strings divided and regrouped with convincing richness.  The dynamics of each surge was well gradated, hinting at a muscular beauty.  The quartet within the orchestra was led by the blissful viola solo of James Eccles, which dwells in the  museful magic that seems to drive this burnished work.

These two works were interlaced by the Tallis tune, Why fumeth in sight the Gentile’s spite, sung by the Sydney Philharmonia choirs supported by the strings.  The next Tudor work – sung by the choir - was Tomkins’ Anthem:  O praise the lord, all ye heathen. The challenges of the part writing of this piece were gravely enriched by the choir, with a burnt umber lusciousness surrounding God’s “merciful kindness” that roiled the sound of forgiveness out across the hall.

After interval, it was time for a rare outing of the Five Tudor Portraits.  This opens with the rumbustiousness of the “Ballad: the Tunning of Elinor Rumming”.  Vaughan Williams gives this long poem by Skelton (1460-1529) a varied orchestra framework and cloth, dividing up the poem into various sections – including a solo for the Mezzo Soprano.  The punning of this verse, its bawdy vitality, is mirrored in the music, thought textually it is not easy to catch all the robust words and rhymes that naturally occur when reading the poem aloud.  The parade of the brewers’ customers was nappily sung by Bronwyn Douglass: ‘then thither came drunken Alice”.  This is protean music, but sometimes the glory of the written poem bests the music, no matter how fecund its invention, a problem Vaughan Williams was aware of.

In this arrangement, one also missed the various interventions of woodwind and brass. The piano sufficed for all of these and was played with crisp rhythmic intent by Cathy Davis.

There was pure lyrical beauty and sly wit in the performance of “Pretty Bess” (No. II) by Jarvis Dams, while the drinking song (No III) was remarkably sprung and fulsome, with its modal Latin and English nattily celebrating the loathsome dead.

The highlight of this performance was “Jane Scroop” (No. IV) – a long and subtly varied romance that modulates as a requiem for a dead pet sparrow.  Its deep, wry cello solo was poignantly played by Anthea Cottee, while the singing of Bronwyn Douglass was lush, clear and fantastical in its rising ecstasy and sorrow.  In response, the tender interjection of the women’s voices was truly beatific. This farewell for evermore almost recalled the Angel from Elgar’s Gerontius, with its deep respect and accord for the dead creature, but always with flecks of humour: “for he was a gentle cock/ and came from pretty stock”.

The final brief Scherzo, portraying the dandy, “Jolly Rutterkin” (No. V), was warmly sung by Jarvis Dams with a nod and a wink and the echoing call of the come hither “hoyda” ringing in tandem with and across the massed choirs.

This is a masterful work, but of a somewhat old-fashioned cut. It was premiered at the same 1936 Three Choirs Festival that saw the startling 20th century frisson of Britten and Auden’s Our Hunting Fathers burst upon the world, with its very different lament for a dead animal and startling savagery regarding the rampant rise of fascism across Europe.

Vaughan Williams gives us a gentler humour - and a more relaxed frisson.  It is still good news that we have room in our musical treasure trove to take stock and appreciate such rarely performed English vocal works. 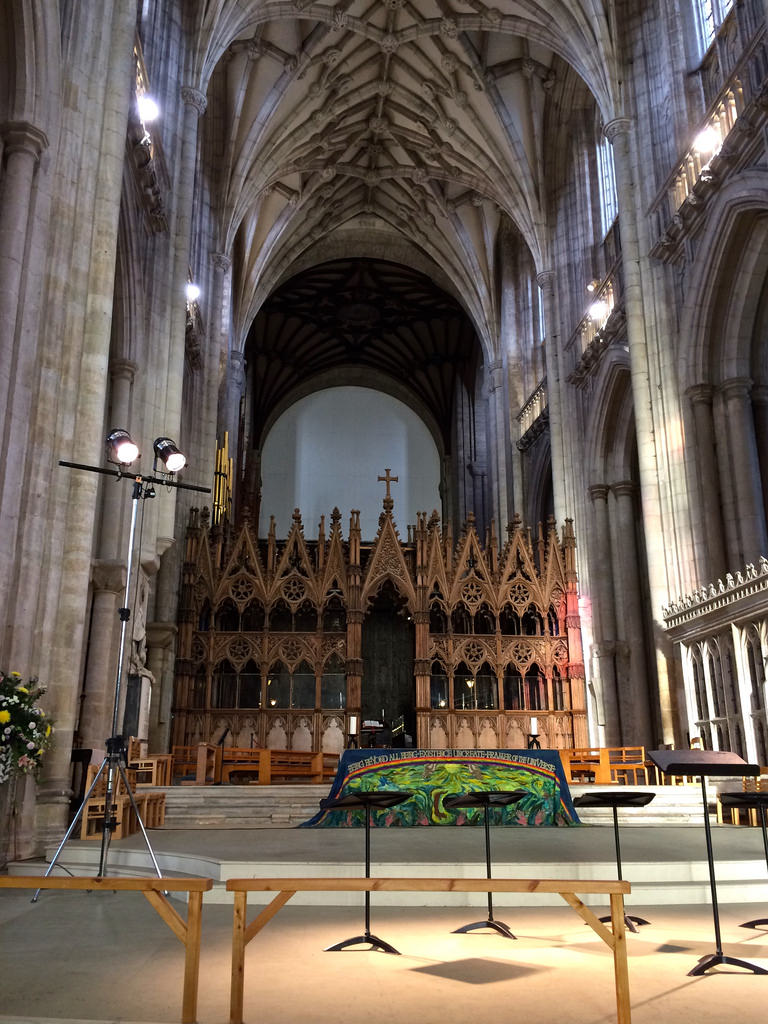