A fulsome comedy with a heart of darkness ​

The Resistible Rise of Arturo Ui (1941-1958) by Bertolt Brecht is a fulsome comedy that attempts to explore the culpability of any populace to the rise of a dictatorship.  Its black humour is layered with a very specific probing that picks away at the relationship between capitalism and fascism.  Its thinly veiled parody of Hitler and his henchmen is comic - fresh fruit and veg is the vehicle for capturing  a city’s economic and political power (all Cauliflower and Kohlrabi)  but the sadistic nature of the gangster UI is deftly shaded, believable, a man deeply engorged on his own sense of density: horrifying and arresting.

Over two hours of intense theatre travelled by rapidly on the enormous energy of a deft ensemble.  There were 11 actors on the stage and 4 cameras, hand held, to reflect by now de rigueur projection of live actors on the big screen.  So we see them on stage but also see them enlarged in postmodern brashness as visual entities. For the most part, this worked well, once past the visual disorientation of the first scene, set in a very Sydney Chinese restaurant that begins the corruption of an old school, upright politician – Hindenburg in the mirror of history – Around the ‘Lazy Susan’ the forces of industry, finance and infrastructure line up to seduce the honourable man into accepting a grand alliance and bribe.

Peter Carrol as Dogsboroughgives a very believable portrait of this old school politician, upright and wary, who gives into life’s’ weariness.  His slow decline and death was carefully plotted until ghost like, he ends this play with its chilling misogynistic reminder that the bitch that gave birth to such monstrosity, charming evil,  is still on heat.

Hugo Weaving, as the charming, self-justifying murderous politician Ui,  is truly awesome giving the character deft shades of Australian mateship and philosophical itches that create a complex human being, bent on destruction. Brecht seems to imply that all such manifestations are preventable, but never quite answers how when the dominance of violence and the absence of law are rampant: violence against violence?

The scene where Uiseeks advice from a stage director on how to present himself is wildly comic, with a stylishly funny Mitchell Butel delivering both a mocking interrogation of emergent dictatorship (how it needs theatrical effect to impress) and darkly disturbing, in how Uisoaks it all up, the histrionics of performance art feeding his swelling soul with pride and knowledge. These themes mingle to shattering effect, both comically and in terms of strangely bitter aftertaste, just as when Uis haves his little Hitleresque moustache, all snowy white, before he undertakes the assassination of his old foot soldier, Roma: the Ernest Rohm of Brecht’s dreams.

As Roma, Colin Moody climbs great theatrical heights in his deadly discourse with Ui, when he warns against the emergent political prize, against the seductive amour of the establishment with its wealth and legitimacy.  The searing discourse cannot hide the infection of betrayal that haunts the stage.

The current it essays - how power requires ongoing sacrifice and consumption of other human beings-  is a stark and uncomfortable component of the play.  The use of Shakespeare throughout the play is both obvious (I come to bury Caesar; the Ghost of Banquo) and somewhat lateral.  The funeral scene in the rain, so beautifully produced, echoes the Richard and Anne encounter from Richard III, as Ui attempts to seduce the widow of the respected publisher whom he has just had murdered.  Anita Hegh was deeply disturbing as the cornered Betty Dullfleet. The black, dank other worldliness of this scene elicits raw emotion that shows how absolute power demands the surrender of body and soul.  The demands of its strict obsequiousness almost articulate powers need to fear glory, in the one strict gaze, in the one world view. Brecht seems to be saying:  watch and imbibe the aura of dictatorship and its never-ending fear.

The cast was full of energy, doubling roles with clever differentiation. The court room trial with is sessions and recesses, was boldly comic, as bloody mayhem builds its overwhelming toxic force. This involved Peter Carrol as a mad female stenographer, Ursula Yovich as an Indigenous Magistrate in white wig feeling the political pulse and wavering deftly in its direction – as the bodies pule up and violence triumphs. This was Keatonesque farce, but stabbing, like Mack the Knife’s weapon.

Directed by Kip Williams, the occasional strained performance note could not dampen enthusiasm for this rich and engrossing comedy that used the full expanse of the Packer theatre, with fluid movement between outsize camera portraiture and the real scale human interaction of richly nuanced archetypes on the stage of remembrance.  This production is a tour de force of invention and at time is very beautiful.  The rose garden arbour scene, before the dark and crude shaft of assassination, was truly memorable with its forest of plaided roses sweeping the stage with their blood red beauty.

The translation by Tom Wright made many connections with the eternal corrupt interplay between state governments and shonky developers in old Sydney town.  This production is both splendid and disturbing – a bit like Sydney town itself. 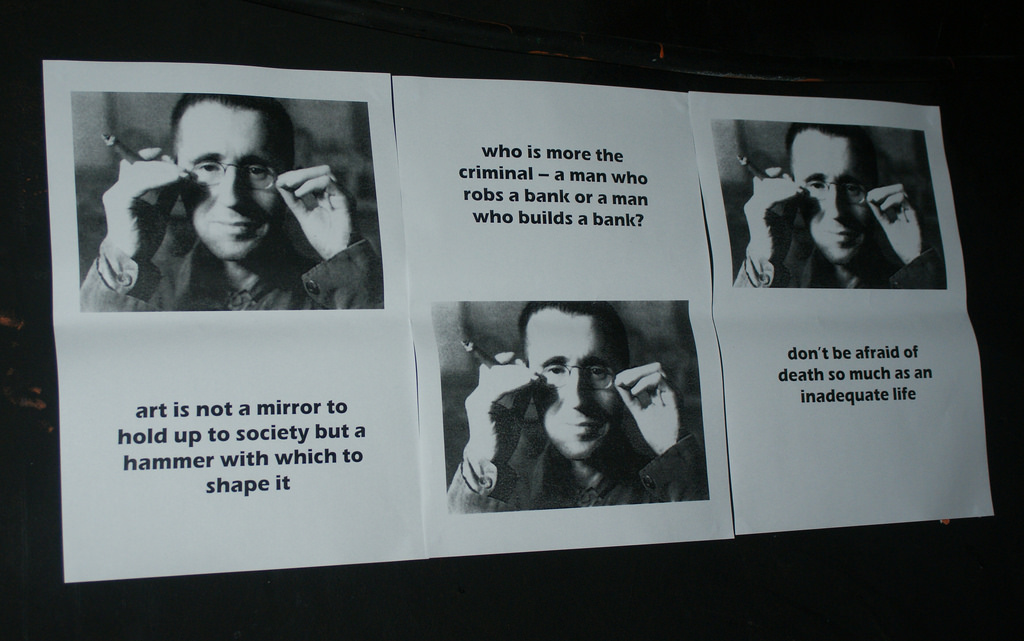