​Jayson Gillham’s piano recital at the City Recital Hall was a triumph of programming and execution.

The program began with crisp and clean Bach – Toccata in C minor (BVW 911.  This is young man’s music, full of fantasy and drama, and was given a lustrous performance that employed wide ranging dynamics: the soft was beautifully tender, the rhetorical flourishes abundantly clear.

This work then segued into the Handel Chaconne in C, HWV 435 (1733).  The filigree in this work, its fancy, was dextrously articulated by Gillham, drawing out the grace and élan of its French influences with robust charm.  The finger work was exemplary.  The wide dynamics employed allowed both wistful and forceful to greet each other in carefully modulated exchanges.

The Beethoven Piano Sonata 21 in C (Opus 53) was well placed in this progression of musical epochs.  Its crystalline energy and beauty was given full rein by the notable technique of Gillham (the first movement generated spontaneous applause), as was the poetry he found in the blustering contrasts that Beethoven explodes across the keyboard.  The small-scale second movement was explored with growing wonderment at its contrast and poetic potential, as if on the cusp of some secret reasoning.

The lengthy first movement was nimbly paced – audience and the pianist enjoying its propulsion and sprit of dramatic improvisation - all supported by a bell like tuneful ardour. The gradations that Gillham achieved in the return of each section of wilful trilling behoved a master pianist.  This was a radiant performance, full of disciplined energy and enjoyment, particularly in the Rondo finale where the glissandi were amazing to behold, rock solid technique releasing all the joy embedded in their animated phrases.

After the interval, Gillham launched into a complete performance of the Etude Symphonique of Schumann – this performance included the 5 posthumously published variations. What an amazing work he delivered to us, dash and energy aplenty, but also tapping into the deep sadness of this composer, even when he is celebrating the joys of love.  Like Beethoven, the dazzling pianism of this work operates across waves and waves of rigorously pursued improvisation.  The sounds swirl, shimmer, agitate, charm, inspire, with bravura strength and disarming simplicity.  Gillham took us deep into the heart of Schumann, the tender and the mercurial, the Apollonian and Dionysian held in structural balance.  Etude XI (Variation 9) was particularly poignant.

The fleetness of the performance was matched by its strength and reserves of strength, pianist and composer as one in their disciplined youth and ardour.  The architecture of the heroic finale, Allegro brillante, was magisterially paced with each return of the conjoint descending and rising melody given a slightly different emphasis – building to a grand conclusions.

After this amazing feat, the young pianist presented some ravishing bouquets by two master pianist composers – Liszt and Rachmaninoff.

The Rigoletto - Concert Paraphrase (1860) distills a particular perfume.  As we watched and heard this extraordinary fancy unfold, two composers merge and maintain their identities, its spectacular and difficult pianism offering up a perfect Rosen bloom of Italian lyrical drama.

The second encore gave us some more Bach – Prelude from Partita No. 3 in E major, BWV 1006 - transcribed for Piano by Rachmaninoff (1933).  Tender and crystalline in its musical argument, this performance exhibited controlled beauty as baroque and romantic assimilated each other.

The young man at the piano beamed his smiles of thanks for our heartfelt applause and afterwards all the senior citizens in the audience queued, like groupies, to see him and secure his signature on his recently released ABC recital disc: https://shop.abc.net.au/products/gillham-bach-schubert-chopin-cd?lf=0c7e0138985176fd429bec8d7bc1552f\

The adulation was well earned. 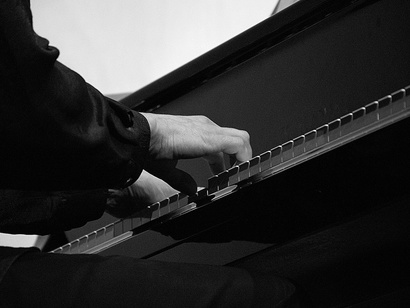