To hear the complete Porgy and Bess with full symphony orchestra and chorus is to live through one of the great operatic experiences.

David Robertson led the Sydney Symphony Orchestra, the Sydney Philharmonia Choirs and a mighty array of soloists and actors in a wondrously sprung performance (semi-staged in the Concert Hall) of this Jewish-American riff on Afro-American poverty and perseverance.

Though the structure of the opera occasionally creaks, the veracity of the music and the feelings it portrays are never in doubt.  The vocal splendour on display (15 solo singers) delivered a crescendo of excellence.  The miking of singers was excellent, but surtitles would have added to the listening experience in those sections where multiple voices sing or sing rapidly.

The Porgy, Alfred Walker, possesses a dark, rich bass- baritone voice, rock solid, and finely attuned to the passion, good humour and self-belief of this character whose humanity shines through the oppression and poverty of black life in Southern American.  His diction was outstanding.

Nicole Cabell sang Bess with lovely tone and deep-seated acting that projected her predicament with clarity, even when her diction could not project all the words (hard for the soprano voice, even when singing in naturally set English).  Her encounter with Crown (Eric Green: tall, handsome, surly, sexual) in Act 2, Scene 2 was powerfully instantiated, the sexual energy and physical power of their doomed attraction totally aligned in music, words and action.  This other love duet, more febrile, contrasted with the famous duet in Act 2 Scene 1, ‘Bess you is my woman now’, which Walker and Cabell sang with glowing energy and precision.

The large cast were totally in character for the whole opera.  Karen Slack as Serena was a revelation, her soprano voice taking us on a journey of transfiguration as the night time funeral rites of her dead husband are enacted.  Just when we thought she had reached the physical limits of our shared sorrow, she rose higher and more ecstatically on shafts of pure throbbing sounds.

Julia Bullock as Clara opened the opera with ‘Summertime’, giving it purity and meaning as she cradled her new baby and expressed the universal hope of each generation that the new may have a better life than the old.  Her husband Jake was gloriously sung and acted by Leon Williams.  His exemplary diction, powerful voice and arresting stage presence was a highlight amongst highlights on this enriching evening.

Gwendolyn Brown as Maria was another vocal revelation, a true contralto with great depth and projection, smooth across a staggering range.  She flecked her portrayal with many deft touches, telegraphing meaning as when she witnesses Bess’s run towards drugs and Sporting Life in the penultimate scene. Her buzzing encounters with Sporting Life almost needed no words.

Jermaine Smith as Sporting Life gave full range to one of the great comic devil roles in opera.  His lithesome body and movements, his firm tenor voice and his visceral intoxicating presence were obvious scene stealers – if occasionally pitching too easily into exaggeration on the vocal side.   His solo, ‘It ain’t necessarily so’, became almost a jaunty echo of Verdi’s Iago and his nihilistic creed.

This fine cast of mainly American trained opera singers displayed the glory of rock solid technique and burnished vocal sounds.  It was notable in the biographies that many of these singers possess fundamental performing careers in the Wagner repertoire, giving support to Gershwin’s view that this opera might one day be compared to Meistersingers.  I would easily swap the Biedermeier xenophobia of Wagner's Nurnberg for the humanity of Catfish Row.

The fulsome Philharmonia Choirs gave full vent to the joyous commentary and lamentations of the Catfish Row community.  Their varied music touches in outline Bach’s chorales and Tippet’s reworked spirituals, but forge their own particular riff with a piquant New World energy.  Again, power and finesse were acutely aligned.

Gershwin’s orchestrations are eclectically beautiful and bound within his own symphonic style.  He draws on jazz, gospel, musical hall, Negro spirituals and the richness of 19th century operatic language with equal felicity and remakes it in his own voice.  His storm scene and community awakening after murder and storm sent out tendrils of affection to Britten and his related world of Peter Grimes.

The orchestra under Robertson encompassed all of this with a level of clarity and power that would be difficult to match in an opera house pit.  The variety of dynamics these musicians unleashed, from the honky tonk piano supported by sparse diaphanous orchestral sounds through to the monumental finale of  ‘I’m on my way’, when hope against disbelief channels the whole body of musicians into one great operatic affirmation, was overwhelming in pacing and beauty.

A night for the gods.  The hybridity of this performance - American conductor, American singers, Australian orchestra, choir and actors - ensured the voices of the New World were well and truly heard. 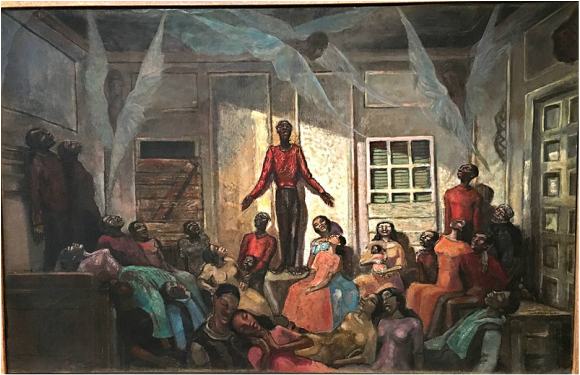